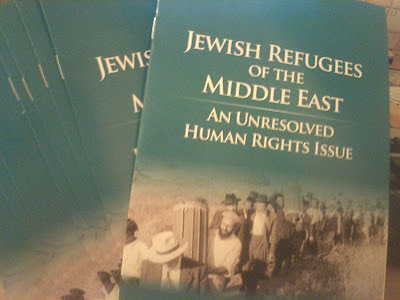 In association with Harif, StandWithUs has just launched its booklet ‘Jewish refugees of the Middle East – an unresolved human rights issue’. The A5 booklet sets out the facts about the Jewish refugees from Arab countries, now largely resettled in Israel.

The 870,000 Jewish refugees from Arab countries, whose ancient communities have been liquidated in the last 60 years, outnumber Palestinian Arab refugees, but their claims for recognition and compensation have been ignored by the UN and the world.

Acknowledging the terrible injustices committed against these Jews, however, can help bring about reconciliation and peace between Israel and the Arab states.

"Jewish Refugees of the Middle East". And how about the Jewish refugees of North Africa?

It is good that things are moving. But not quickly enough.We are nearing the end of our life and all around me Egyptian Jews are leaving this "valley of tears!"
suzy vidal

A5 refers to the paper size, which is used in the UK.