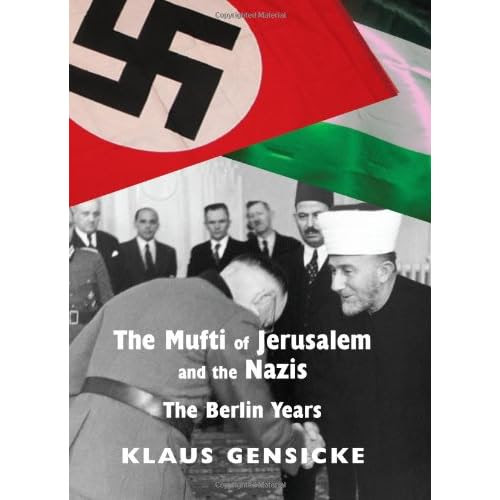 Klaus Gensicke's book The Mufti of Jerusalem and the Nazis: the Berlin years shows, beyond a shadow of a doubt, that the Palestinian Mufti's relationship with the Nazis was not just an expedient anti-colonial alliance - it was ideological. Anti-Zionist thinking would soon lose its moral authority, argues Norman Goda in Jewish Ideas Daily, as soon as it were shown to have its roots in Nazism:

The enduring nature of the Israeli-Palestinian conflict, the attacks of September 11, and the antisemitic rhetoric of Mahmud Ahmadinejad and other extreme Islamists has produced contemporary interest in the history of antisemitism in the Arab/Muslim world. Specifically, scholars and journalists have asked whether there exists a link between Nazi thinking on the Jewish question and current discourse in the Arab/Muslim world on Jews and on Western modernity. These questions are of great importance. Current “anti-Zionist” rhetoric is said to center on anticolonial narratives, which carry moral authority with many on the political left in Europe and in formerly colonized regions. But this moral authority would vanish should the roots of anti-Israel thinking be shown to have its roots in Nazism.

Scholars have tackled the problem from many angles.[1] But a key piece to the puzzle is Haj Amin al-Husseini, the Grand Mufti of Jerusalem from 1921 to 1948. In 1941 the mufti, having triggered failed revolts against the British in both Palestine and Iraq, gravitated to Berlin, where for four years he tried to tighten bonds between Nazi Germany and the Arabs and Muslims of the Middle East. After Germany’s defeat he fled to Paris, then Cairo, then Beirut, while styling himself as a nationalist and anti-imperialist. Was the mufti’s policy in Berlin simply a question of anti-British pragmatism? Or was he the missing link between the Nazis’ war against the Jews and more extreme forms of Muslim antisemitism today? And whom did the mufti ultimately speak for in the Middle East?

The complex of issues is the subject of Klaus Gensicke’s Der Mufti von Jerusalem und die Nationalsozialisten (2007), now translated and updated as The Mufti of Jerusalem and the Nazis. The book is based primarily on German and British records and shows that the mufti’s role in Berlin was multilayered yet telling. On the one hand, he never convinced the Germans to back his geopolitical aim of an independent Middle East under his own leadership. On the other, he endorsed Nazism’s war against the Jews on ideological grounds, and contributed where he could to the Jews’ destruction.

Amin al-Husseini was initially a clan leader and uncompromising political agitator. He worked against the Balfour Declaration from the moment it was issued in 1917 and helped trigger riots against the settlement of European Jews in the 1920s. The British hoped to co-opt him and the Husseini clan by making him the Grand Mufti of Jerusalem in 1921. The position made Husseini responsible for Islamic holy sites, but Husseini used it to argue that the Jews were trying to control the al-Aqsa Mosque and to augment his political standing. By 1936 he was head of the Arab Higher Committee, a position from which he claimed to speak for all Arabs. The revolt he triggered in Palestine from 1936 to 1939 sought to end British rule and to eliminate the mufti’s more moderate Arab political opponents.

Husseini adopted an uncompromising antisemitism that viewed Jews not just as Western interlopers in Palestine and not just as religious infidels, but as an existential threat as per the modern European antisemitic tradition. He rejected British partition schemes for Palestine in 1937 as well as the 1939 White Paper, which sharply limited Jewish immigration and was accepted by the more moderate Nashishibi faction. Instead the mufti courted Nazi Germany from the moment Hitler came to power in part because Hitler, at least when it came to Jews, spoke his language. Husseini argued to German interlocutors that, “Current Jewish influence on economics and politics is injurious all over and has to be combated” (p. 29). Living in exile in Baghdad after his failure in Palestine, he further demanded the expropriation of the 135,000 Jews there--who were hardly part of the European Zionist movement--and he instigated the pogrom that eventually erupted in Baghdad after the failed anti-British revolt in 1941.

Most crucial is the mufti’s period in Berlin from 1941 to the end of the war. On the one hand, Husseini hoped to win Hitler’s support for an independent Middle East while outflanking his Arab rivals in Berlin, namely Rashid Ali al-Kailani, who led the coup against the British in Iraq and whom the Germans hoped they might return to power there. On the other, he hoped to enlist the Germans to help with the eradication of the Jews in the Middle East. It was one of the mufti’s great disappointments that Hitler, realizing Italian aims in the Middle East and viewing the Arabs as another inferior Asiatic race, refused to back Arab independence openly. Husseini was sure that such a statement would deliver the Arab world to the Axis while cementing his own position in the Arab world. But Hitler and the mufti were in full accord that when Germany defeated the British, the Jews of Palestine would be destroyed. The mufti knew what this meant. When he met personally with Hitler in November 1941, Nazi propaganda on the Jews had been clear for two decades, and the Germans, with local help, had been killing Jews in the Soviet Union for four months.

Here indeed was the crucial link between the mufti and the Nazis. Unable to agree on Middle Eastern geopolitics, they could agree that Jews controlled the governments in Moscow, London, and Washington, and that murder was a desirable policy by which to eradicate Jews from the Middle East. The mufti was pleased to broadcast this message to the Arab world through the use of German radio facilities, and the Germans were pleased to have him do so, particularly after June 1942 when it looked as though the Afrika Korps, with an attached SS murder squad, would break through British defenses. As late as December 1942, with the Allies having taken the offensive in North Africa, Husseini, on the opening of the new Islamic Central Institute in Berlin, proclaimed that “the Holy Koran ... is full of evidence of Jewish lack of character and their insidious lying and deceitful conduct” and that the Jews “will always remain a divisive element in the world ... committed to devising schemes, provoking wars, and playing people off against one another” (p. 108). As scholars have pointed out, the tone and content of Arab propaganda from Berlin, speaking as it did of Jewish global conspiracies, has much in common with extreme Arab narratives today.

Gensicke points out, however, that the mufti was more than a propagandist while in Berlin. He conducted his own diplomacy, acting as a mediator between Berlin and King Farouk of Egypt in 1942. He tried to create an Arab legion with French POWs from North Africa to help the Germans and he also helped with the recruitment of the Bosnian Muslim SS division in 1943 that fought against Josef Tito’s partisans in Yugoslavia. Berlin’s desire to use him for German ends rather than place him at the head of an Arab independence movement infuriated him. Yet as Gensicke points put, the mufti openly committed himself to the Germans past the point of no return. Besides, the German Foreign Ministry kept him in opulent comfort, providing him with immense sums for his work and living expenses.

And regardless of the mufti’s frustrations with Hitler, the Jews remained his existential enemy. In spring 1943 when gas chambers in Poland murdered Jews from all over Europe, the mufti engaged in quiet diplomacy with the Romanian, Bulgarian, and Hungarian governments, urging them not to allow a few thousand Jewish children to travel to Palestine as was then being discussed in London. The Jews would be better off, the mufti said, in Poland where the Germans could keep an eye on them. Husseini enjoyed a close relationship with Heinrich Himmler and knew what awaited deported Jews. The mufti never drove the Final Solution--Himmler was unwilling to allow Jews to escape in any event--but he worked to ensure that as many Jews were killed as possible. In the meantime he tried to fuse Islam with Nazism, creating seven new “pillars” that included the thesis that, “In the struggle against Jewry, Islam and National Socialism come very close to one another” (p. 149).

Gensicke points out that Husseini could easily have been tried for war crimes, particularly in Yugoslavia where Bosnian Muslims he recruited engaged in various excesses. But following his escape to France in the war’s final days, neither then French nor the British wished to inflame radical Arab opinion by extraditing him. The mufti’s apologists in Palestine and Egypt could thus claim that he tried to use the Germans for anticolonial aims rather than collaborating with them. Moreover, his role in the Final Solution did not come up in postwar trials. The distortion had immediate effects in Cairo, where Arab nationalists launched a pogrom to celebrate his arrival in 1946. It also had effects in Palestine, where as a hero with bona fides he effectively agitated against 1947 UN partition schemes, called for the immediate destruction of the Jews once the British left, and branded Arabs who accepted the partition as traitors. It all backfired. “The Mufti,” concludes Gensicke, “bore much of the blame for the naqba,” by which the attack on Israel in 1948 created throngs of Arab refugees (p. 189).

To the victor belong the spoils? (With thanks : Michelle)

what can I say about that despicable Mufti?! I hope he nis rotting in Hell! Amen
suzy vidal