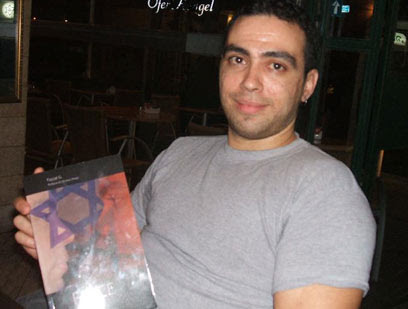 Amusing and amazing tale of a Moroccan Muslim from Casablanca who has settled in Tel Aviv, thinks Israel is 'centrally important' to him and written a book about his experiences. From Ynet News:

At first glance, Fayce (not his real name), looks like a normal, young Tel Aviv resident. His native sounding unaccented Hebrew - complete with all of the Israeli slang - and his mannerisms bear all the hallmarks of someone who has lived in Israel for a long time.

But Fayce is actually a Muslim Moroccan from a poor Casablanca district, who arrived in Israel in 1997 on a student visa, to study at Tel Aviv University.

His remarkable story has been turned into a book in French, which he authored, and which is being published by Beni Issembert, an Israeli journalist who made aliyah from France.

Since arriving in Israel, Fayce has quickly adopted what he calls "the hutzpa here," which he has come to admire.


He has fallen out with Israeli Arabs after defending Israel in political arguments, and come close to being a victim of a Palestinian suicide bomb attack on the Tel Aviv Dolphinarium club, which killed 21 Israelis, mostly teenagers. He met his girlfriend while she was serving as an IDF soldier, and fell in love for the first time in Israel.

Fayce has also formed a close knit group of Israeli friends. "I feel completely Tel Avivian," he declares proudly. "Tel Aviv and Casablanca are two sides of one large Mediterranean culture, and I have both of them in me. I'm neither here nor there," he adds.

Now, an employee for a Tel Aviv hi-tech company, two years after his student visa has run out, he is facing an uphill struggle against the Ministry of Interior to have his visa extended, so that he can pay off his student debts and leave "with my head proudly held up," he says.

"My story began when I went to a Jewish school in Casablanca," Fayce explains. "My mother worked for a lawyer who was the president of the Casablanca Jewish community, and she arranged for me to go to that school as it gave me a real edge and a potential to succeed in the future," he adds.

That already marked him out as different in Morocco, Fayce says. As he grew up, Fayce became interested in medicine, but was rejected from a Paris institute. He heard about Tel Aviv University's medical course, and decided to give it a shot.

"When they accepted me, my mother immediately arranged my air ticket and packed all of my cloths. She knew I would not return, but she wanted me to have an opportunity to make it in life," Fayce says. "Next thing I knew, I was flying, for the first time in my life, out of Morocco.

After a stop over in London, I landed at Ben Gurion airport in Tel Aviv." During his first night in Israel – hungry, scared, and completely disoriented - Fayce was checked by security guards at the airport several times, as he was wearing a jacket in the summer.

After realizing he was not a terrorist, each guard told Fayce, Baruch Haba (Hebrew for: Welcome). "I thought it was a curse," Fayce recalls. "I didn't understand why the security guards in Israel cursed after examining me, so I cursed back in Moroccan Arabic, which they didn't understand. They nodded me through."

Fayce received a helping hand to manage his degree financially from the Institute for Higher Education, and also took on a job to help pay for his education.

On Tel Aviv University's campus, Fayce said, he encountered Israeli Arabs who found it difficult to understand what he was doing in Israel. "One of them asked me, 'why did you choose to study here? Why not go to Egypt?' I replied: Why should I go to Egypt, the education here is much better. He was very insulted, and called me a 'traitor.' I asked him who I was betraying, and he said, 'us,'" Fayce recounted.

"I told him, 'let me say something that you don't know. You are the only the Arabs in the world who know what democracy is. There is no other place that can you criticize so openly like this. If you did it in Morocco, you'd find yourself in jail. If you don't like it here, why don't you go study in Egypt," he added.

"Only people who live here have a right to make comments about the situation," Fayce said, recalling how close he came to being killed in the 2001 Dolphonarium bombing. Fayce was on his way to the club when the suicide bomber attacked, and was saved because he was a few minutes late. "I saw the horrific after-effect of that," Fayce said, moving uncomfortably.

"Before I came to Israel, I saw the Arab TV coverage. In the Arab world, they are taught to think that it's all armed Israelis against rock throwing Palestinians. Of course, it's not like that at all," he said.

As he quickly learned Hebrew, Fayce became acquainted with the Sabbath in Israel. "I once asked shopkeepers why they were closing the stores early on Friday afternoons. Was there a war or something? They would say, 'Did you fall on your head? It's Shabbat!' I was embarrassed, so I'd say, I know, just kidding," Fayce recalls with a smile.

"During the first Yom Kippur I experienced, I had no idea where everyone went. The campus suddenly became empty. I was mystified," he adds.

Fayce's book has an introduction by Vice Premier Shimon Peres. "For him, Fayce represents the true meaning of peace – someone who goes out to look for an education, and finds it irrespective of race or religion," Beni Issembert, the book's publisher says. "This story is outstanding, literally, it completely stands out among stories," he adds.

Read article in full
Posted by bataween at Tuesday, December 13, 2011