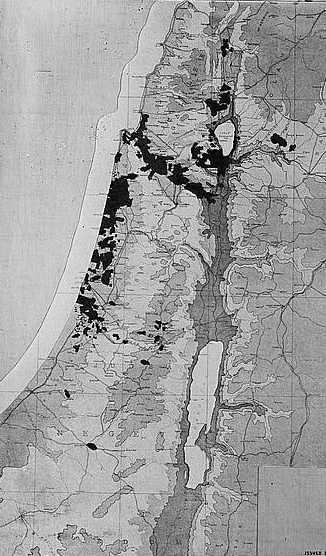 It won't come as a surprise to readers of Point of No Return - we've already highlighted the Jewish-owned land in 'Arab' areas here here here and here, but the indispensable Elder of Ziyon has found this useful map and some background information on Jewish National Fund land in Syria: (with thanks: Michelle)

"With a little research I found this article from Globes in 2000:

"Globes" has further learned that the documentation proving JNF ownership of 53,000 dunams on the Golan Heights deep inside Syria were submitted to Prime Minister Ehud Barak for presentation at the negotiations with Syria.

JNF chairman Shlomo Gravitz today confirmed that JNF owns 5,000 on the Golan Heights, and another 53,000 dunam deep inside Syria. He said, "It's important that the public be aware that there are lands on the Golan Heights and in Syria that belong to the Jewish nation, not to Syria. We transferred the material to the Prime Minister for use during the negotiations."

The JNF also owns land beyond the borders of Israel: a few thousand dunams in the Gaza Strip, which is currently under the control of the Palestinian Authority (PA) and broad tracts of land and in Areas A and B in Judea and Samaria, which are also controlled by the PA. The Deheisheh refugee camp, for example, is situated entirely on land owned by the JNF. The JNF owns 53,000 dunams of land in Syria in a region located about 30 kilometers south of Damascus. These lands are registered in the name of the JNF in the Syrian land registry. Additional tracts of land owned by the JNF are located in Jordan, mainly in the area of Naharayim that was transferred to Jordan following the peace accords. These lands are registered in the JNF’s name in the Jordanian land registry. All the land was purchased by the JNF before the demarcation of borders recognized today.

Read post in full
Posted by bataween at Sunday, December 04, 2011

this text is provocative. What is it aiming to do? Attract more hatred on Jews?
suzy vidal