'Jews want to go back to Libya' - Jewish leader in Israel 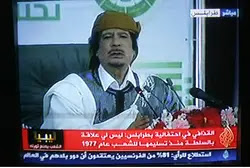 The leader of the Libyan Jewish Association in Israel, Meir Kahlon, is trying to give the most positive spin possible on regime change in Libya. Jews of Libyan origin in Europe,want to go back, he says. But not Jews from Israel - they only want to visit. Report in Israel National News:

The fall of former Libyan dictator Muammar Qaddafi (pictured) has caused Libyan Jews to wish to return to their homeland and resume the great heritage they established there, a Libyan Jewish leader told Arutz Sheva on Tuesday.

Meir Kachlon, Chairman of the World Organization of Libyan Jews, said that his organization has created an excellent relationship with the opposition leaders who took power instead of Qaddafi.

“We sent Dr. David Gerbi, who is a psychologist by profession, to help those who were affected by the civil war in the country,” Kachlon said. “We received a letter from opposition leader Abdul Jalil who asked us to provide humanitarian assistance. We have contacts all over the world and we told him that we are happy to help him.”

The World Organization of Libyan Jews last summer formally recognized the National Transitional Council, headed by Mustafa Abdul Jalil, as the country’s new regime. The organization is comprised of some 200,000 former refugees, many of whom fled to Israel.

Kachlon said on Tuesday that there are Jews who currently live in Europe and who left considerable property in Libya and that those Jews wish to go back to their place of birth.

“We hope they establish a democratic government and those Jews can return to Libya,” he said. “Recently the only synagogue in Tripoli that was not destroyed was cleaned up. There is a large percentage of Libyan Jews who fled to Europe and want to go back. We in Israel have no interest to go live there, but we would be happy to visit.”

It is normal to be homesick for the country of our birth. Especially those who have settled in Europe where things are not very encouraging for Jews. If they still have enough strength to go back and start all over again, then so be it.But will they also go back with the children and grandkids? The grandkids born outside of Lybia and who are going to school
may not feel like leaving their new homeland.So there may be another new group of displaced people!Nothing is ever perfect!
suzy vidal (aka sultana latifa)

Are they mad?
The TNC government exists on suffrage only with islamists controlling the reigns of power through the armed forces.

I can sympathise with jews wishing to reclaim their property that was stolen when they were ethnically cleansed from Libya but going back to live there is not the way to go about it. Court action in countries which Libya does business (sells oil) in is the only way.

If jews go back they'll be a hostage to fortune, and as we see with christian communities throughout the arab and islamic world minorities are nowhere welcome, everywhere despised, usually harassed and not infrequently made to pay with their lives.

Jews are just about the lowest of the low in islamic/arab countries now. Live in one at your peril.