Jewish refugees - and the Four Sons 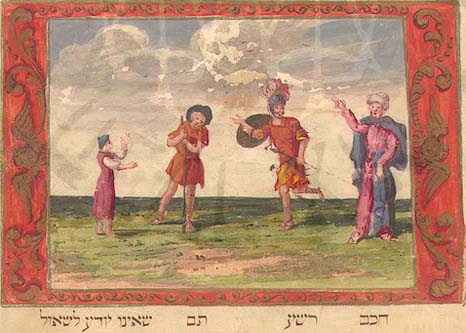 With the launch of Danny Ayalon's video "The truth about the refugees', the issue of the Jewish refugees has burst on the global scene. Many people are discovering the issue for the first time. The broad spectrum of responses and comments - ranging from the encouraging to the sceptical - reminds me of the Four Sons we invoke at Passover -the Wise, the Wicked, the Simple and the One who doesn't know how to ask (or in this case, deal with) the question. Responses can be broadly divided into four categories. Let me explain what I mean!

The Wise Son wholeheartedly agrees that Jewish refugees are a key issue. Longstanding and more recent Arab and Muslim antisemitism caused the exodus. Justice for the 850,000 refugees is a moral imperative. There must be a reckoning with Arab states. The UN must include Jewish refugees on its human rights agenda. Only if Arab states apologise, recognise and compensate can we all move on.

The Wicked Son is in deep denial. The Jews were not refugees - they left of their own free will. They came to Israel out of Zionism. In fact, it was the Zionists who set bombs off to scare them. Sometimes the Wicked Son does acknowledge that some Jews were driven out and dispossessed. In these cases, the individual victim must raise the matter with the Arab state responsible. Israel must not be allowed to benefit, morally, financially or politically from this issue.

The Simple Son has never heard of Jewish refugees. As far as he is concerned, Jews and Muslims coexisted happily throughout the ages until the advent of Zionism. The Palestinians are innocent of any wrongdoing towards Jews in Arab countries. He has absorbed the propaganda that there are six million Palestinian refugees, and therefore their problem is much greater.

The One who doesn't know how to handle the question - what does he say? He jumps to the wrong conclusions. He acknowledges Jewish suffering, but thinks there should be a 'right of return' for both sets of refugees. (He hasn't considered the fact that such an upheaval would cause more suffering and more refugees). As far as he is concerned, there must not be a 'suffering competition'. Each group must be dealt with separately.
Posted by bataween at Thursday, December 15, 2011

i LIKED THIS TOO! Very poetic and well said.Maybe you should include the naive son like my dear father.
HEre it's dark and cold but when I think of Israel, my life brightens up!
sultana vidal
PS there is no way I will ever go back to that country (the one where I was born!)