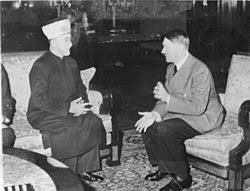 Seventy years ago this week, the Mufti of Jerusalem met Adolph Hitler in Berlin. The meeting cemented an alliance between two men with a deadly common interest: the extermination of the Jews. Emet M'Tsiyon blog has a summary of what went on at that meeting (with thanks: Eliyahu):

We know what went on at the meeting since two written records were made, one by Hitler's secretary (one Schmidt), the other by the Mufti himself.Here we quote from the German record:
The Fuhrer then made the following statement to the Mufti, enjoining him to lock it in the innermost depths of his heart:
1. He (the Fuhrer) would carry on the battle to the total destruction of the Judeo-Communist empire in Europe.
2. . . . the German armies would in the course of this struggle reach the southern exit from Caucasus.
3. . . . Germany's objective would then be solely the destruction of the Jewish element residing in the Arab sphere under the protection of British power. In that hour the Mufti would be the most authoritative spokesman for the Arab world. It would then be his task to set off the Arab operations which he had secretly prepared. . .
. . .
The Grand Mufti replied that it was his view that everything would come to pass just as the Fuhrer had indicated. He was fully reassured and satisfied by the words which he had heard from the Chief of the German State. . . .
The Grand Mufti thanked him. . . .

Read post in full
Posted by bataween at Friday, December 02, 2011