From Algeria with love - a song for Hanucah 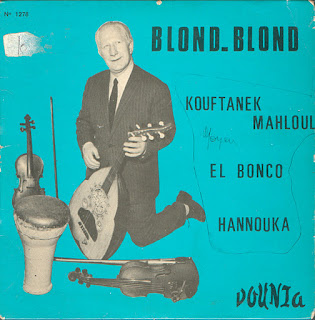 From Algeria, with love - scroll down for one of the greatest Hanucah songs you've never heard! El Bonco - Hannouka was unearthed by Chris Silver of the Jewish Morocco blog. It is performed by Blond Blond, an Albino Jewish musician - one of the few who kept performing in Algeria after independence. (With thanks: Michelle)


"I know it looks mis-spelled but El Bonco – Hannouka is one of the greatest Hanukkah songs that you’ve never heard – courtesy, of course, of the master Algerian Jewish singer Blond Blond.

Albert Rouimi, who was given the moniker Blond Blond due to his Albinism, was born in 1919 in Oran, Algeria. From a young age he frequented the cafes that featured legendary Orani musicians like Saoud L’Oranais, Maurice El Medioni’s father, and Reinette L’Oranaise. His influences ran across both sides of the Mediterranean, he was deeply affected by the music of Charles Trenet and Maurice Chevalier for example, and he found himself going back and forth between France and Algeria for much of his career. In 1937, he left for Paris only to return to Oran two years later. It’s unclear how the rise of Vichy France played into this but needless to say Blond Blond left Paris in 1939 and returned only after end of World War II.

Back in Oran, he became known as l’Ambianceur for his unique style of singing and his staccato-like spoken word that interspersed his music. While Blond Blond could make an audience laugh there was also no doubt that he was truly a master musician with significant technical knowledge. He was fluent in the Andalusian repertoire, nailed it in French, commanded chaabi (especially the musical styling of Lili L’abassi) and pioneered the Francarabe style, a mixture of French chansons and Arabic chaabi.

He released dozens of records throughout his career, including many on 78 rpm, and recorded for everyone from Pathe to Samyphone to Dounia. He not only performed from his own work and with his own orchestra but also collaborated with some of the finest musicians of his day like Reinette L’Oranaise, Samy Elmaghribi and Line Monty.

Blond Blond was one of the few Jewish Algerian musicians that performed in Algeria post-independence and gave two memorable performances at the Koutoubia music hall in Algiers in 1970 and 1974. Blond Blond, l’Ambianceur, died in 1999 at the age of 80.


Happy Hanucah to all PoNR readers!

Thanks to Sylvia for explaining some of the song's lyrics:

L-bonco is a dice game, a favorite with gamblers. Like all games of chance in the Maghreban Jewish dialect, including card games, it has a Spanish name.

This metaphor is continued throughout and there are great plays on words. I would need to listen to it several times to catch all those pearls.
Posted by bataween at Tuesday, December 20, 2011

I've listen to it last night for the first time and indeed this is the greatest liberal version of Hanoucca I've ever heard. It is extremely rich although it might not mean much to those who don't master the Maghreban idioms.

Here is a small taste just from explicating the title of the song:
"El Bonco Hanoukka"

L-bonco is a dice game, a favorite with gamblers. Like all games of chance in the Maghreban Jewish dialect, including card games, it has a Spanish name.

This metaphor is continued throughout and there are great plays on words. I would need to listen to it several times to catch all those pearls.

Sylvia. Thanks for the great translation! I would love to be in touch by email. You can email me at cbsilver at gmail dot com.