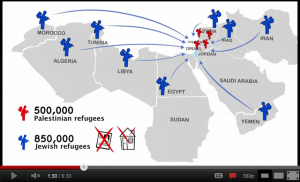 A French umbrella website, Le Post, where other news blogs upload their posts, has censored a post containing the Danny Ayalon video ' The truth about the refugees' on the grounds that it is 'potentially defamatory'.

This the third time that a post by the Europe-Israel blog has been 'moderated' out of existence. The blog retorted with a long list of facts about the Israeli-Arab conflict. "Are these facts defamatory?" it asked.

"The fact is", Europe-Israel blog continued," Le Post's " moderation" is censorship when the facts contradict the French foreign ministry's policy. This dictates that Israel is guilty of all crimes towards those nice refugees. The world would be better off without Israel and the Jews. Historical facts are swept aside in favour of misinformation and denial."

When Europe-Israel asked for a further explanation, Le Post claimed that the video was removed for being 'potentially racist.'

How Le Post can equate Ayalon's video with 'racism' is beyond comprehension. I guess any old explanation would have done, as long as the truth is suppressed.

Even in NZ, a charity was criticized by the NZ Government Charities Commission for inciting racial intolerance for providing links to Ayalon's videos on its website. Yet the videos focus on facts and makes no ad hominem attacks on Arabs, Palestinians or anyone else for that matter.