19th c. Tunisia: when fat was a feminine issue 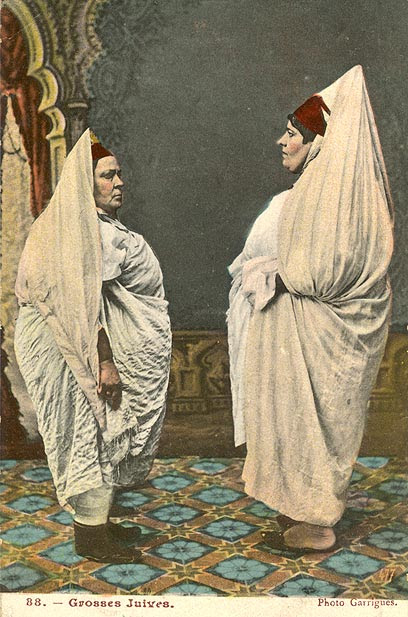 It seems inconceivable in this age of size Zero models that fat women were once considered desirable, nay sexy. What is even more unbelievable, is that 40 days before their marriage, betrothed girls were locked in darkened rooms so their skin would become milky white, like so many calves bred for veal. They were force-fed with oil and carbohydrate-rich foods, eggs and milk like so many French geese. So plump were these Jewish women that they had trouble negotiating the narrow alleyways of the Jewish Hara. The practice was common among Tunisian Jews in the 19th century and early 20th century and presumably fell out of fashion as Tunisia underwent westernisation.

In the Winter 2011 issue of the Journal of Middle East Women's Studies, Hagar Salomon and Esther Juhasz present a 38-page study on every conceivable aspect of the practice of fattening up girls before marriage. Their paper was the inspiration for this article in Ynet News. Here is part of the abstract:

"This paper offers a critical reading of the representation of the female body in postcards and travelogues, in descriptions written by members of the Tunisian Jewish community, and in interviews conducted with group members now living in Israel. The meeting of these voices called for a multidimensional examination of central themes including the ideal female body, its boundaries, and transgressions of those boundaries; mechanisms of control; and the complex relationships between honor and shame and between attraction and repulsion. Hence, the full, rounded bodies of Tunisian Jewish brides were sites of transformation where these multiple meanings came together in complex and at times contrasting ways. "

Kate Moss - eat your heart out (if you dare)!

Read article in full (translated from the Hebrew by Google )
Posted by bataween at Sunday, December 11, 2011

What was life like for these women,did they suffer prejudice more, i can't imagine that life for them was easy?