The story of rare Torah scrolls from Yemen 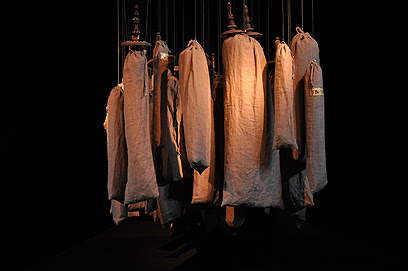 Torah scrolls on display at Hechal Shlomo, the seat of the chief rabbinate in Jerusalem

At a festival in Israel last month, the stories were told of rare Torah scrolls salvaged from the diaspora and transported to Israel, sometimes at great personal risk. Here are the stories of two scrolls from Yemen. Ynet News reports:

Amos Rachamim, a youth instructor and a truant officer, related during the festival the story of two Torah scrolls of the Yemeni Jewry – one of them 400-year-old, which includes detailed explanations on growing medicinal herbs, inspired by Maimonides' writings.

Many read the scroll, which was passed from generation to generation, and sought advice on daily problems.

Rachamim also revealed the story of the "al-Manzali" Torah scroll, written by Yehia Jamil – one of Yemen's greatest religious judges – about 300 years ago. The Muslims were the ones who guarded it until the Jews returned from exile.*

Jamil lived 30 kilometers from Sana'a and was recognized by Jews and Muslims as a saint. According to tradition, he wrote the Torah scroll with half of his body immersed in a ritual bath.

The scroll was passed from generation to generation until it reached Israel, at the Ein Shemer transit camp which took in many Yemeni Jews. Today it can be found at the synagogue in Moshav Naham.

*In 1630, the Zaydis took over Yemen from the Turks. In 1679 part of the Jewish community of central Yemen was expelled to Mawza, on the southern shore of the Red Sea. Many exiles died there from disease and starvation.The community was allowed back a year later for economic reasons.

Shared! How telling the Jews were allowed back for economic reasons: same old reason! Arabs could not even produce enough to feed their families! Jews create things, jobs and wealth; mozlems scream, raid and loot.
This is the conspiracy of Jewish control: to hide mozlem laziness, violence and predatory behaviour!!

now now Juniper!!! you are faling into the same trap as these extremists!
ponder over this: 'la caravanne passe et les chiens aboient" Let them shout and scream and do anything they like, you cannot get bllod from a dead donkey!
sultana latifa