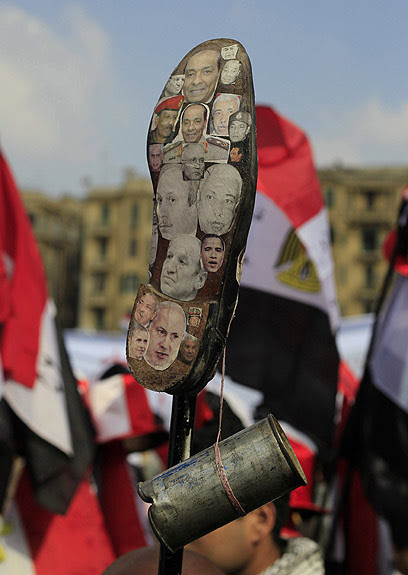 'All the people we love to hate' in Cairo (Photo: AFP)

As Egypt goes to the polls this morning, another victory for Islamism is on the cards: Moroccan and Tunisian Islamists already form the largest groupings in their respective parliaments; Islamists played a significant part in the ousting of Col. Gaddafi in Libya. Mark Silverberg, writing for the International Analyst Network, gives a good account of what the imposition of Shari'a law will mean. Meanwhile, the US administration, with its fixation with 'moderate' Muslims, remains dangerously clueless.

With all the talk of revolutions, the Middle East continues to slip backwards. We see mobs burning buildings, and President Obama quoting Martin Luther King - “There is something in the soul that cries out for freedom” - while the leaders of this "democratic transformation" read Mein Kampf and are well on their way to establishing Islamic theocracies across the region.

While the Administration has sought “clarifications” from the Muslim Brotherhood concerning future relations with Israel, and minority and women’s rights, it has not received any formal response. What it did receive was news that Muslim Brotherhood leader Dr. Ahmed al-Tayeb had just told thousands of his followers in a major Cairo mosque: “In order to build Egypt, we must be one. Politics is insufficient. Faith in Allah is the basis for everything.”

Time and again, a Koran quote vowing that "one day we shall kill all the Jews" was uttered at the site. Change is indeed coming, but it is not the sort of change this Administration has in mind. For anyone who has the slightest understanding of the socio-political crises gripping the Arab Middle East today, it is clear that the “Arab Spring” is morphing into an “Arab Winter” leaving in its wake political instability, Sunni-Shiite rivalries, bloody clashes, assassinations, bombings, massacres of civilians, sectarian violence, Islamic theocracies, and massive refugee problems – most notably from Syria - everything except liberal democracy as we know it.

If anything, it's an "Islamic awakening", and the only winners will be the Muslim Brotherhood (whose political aims are akin to those of the revolutionary Khomeinists in Iran), its ideological ally Hamas, and the Salafists (who are even more extreme in their Islamic views).

We never learn from history. In 1979, as the Ayatollah Khomeini was seizing power in Iran and turning a largely peaceful secular revolution into a brutal Islamic theocracy, the New York Times ran an op-ed column entitled "Trusting Khomenei." The column argued that Khomeini was being depicted unfairly as an anti-Semitic theocratic reactionary when instead, "Iran may yet provide us with a desperately-needed model of humane governance for a third-world country." We all know how that turned out, but that didn't stop the Times from running another front page "news analysis" in February 2011 extolling the virtues of Egypt's Muslim Brotherhood. What happened in Iran, it assured us, could never happen in Egypt as the Brotherhood "is a mainstream group that stands as the most venerable of the Arab world's Islamic movements."

And then there is the senior member of Egypt’s Muslim Brotherhood, Kamal al-Halbavi, who said he hoped Egypt would have “a good government, like the Iranian government, and a good president like Mr. Ahmadinejad, who is very brave.

”Even now, the Administration does not yet fully understand the implications of probable Muslim Brotherhood victories in Egypt, Libya, Jordan, Yemen, Syria, Tunisia and the West Bank. To do so, it need only consult the most recent Gallup poll in Egypt (and Egypt is typical of other Arab countries in this regard) where 64% of Egyptians say that Shari'a must be the only source of legislation in their country, and in a December 2010 poll, 82% of Egyptians said they favored stoning adulterers, while 77% supported cutting off the hands of thieves.

When these attitudes translate into an electoral victory, the Brotherhood can be expected to prevent parliament from passing any law that contradicts the explicit commands of Allah as conveyed through the Koran, the Hadith, and the example set by the prophet. Uriya Shavit of Tel Aviv University explains the implications of this in the autumn issue of AzureOnline (Shalem Center): “As Islamist scholars have explained repeatedly, human beings cannot permit what Allah has forbidden, nor can they ban what Allah permits.” She continues: "The inevitable result of (the Muslim Brotherhood’s) electoral victory will be the formation of a theocracy. It will not permit the scientific and technological revolution of which Arab societies are in such dire need.”

If Sharia is to become the supreme adjudicator of future legislation across the Arab world, non-Muslims will be excluded from full participation in Arab societies, official second-class status (dhimmitude) will be conferred on them, and their lives and property will be protected only so long as they pay the Jizya – a discriminatory tax that must be paid by non-Muslims under Islamic law. It can also be assumed that Islamic law will prohibit women and Christians from running for President, validate polygamy, the amputation of limbs, gender apartheid, the ethnic cleansing of Jews, mandatory donning of the veil for women, honor killings, the execution of homosexuals, prostitutes and apostates (those who convert away from Islam), female genital mutilation, bans on music, dancing, men and women mixing in public, the blowing up of liquor stores, restrictions on scientific and technological inquiry (the effect of which will suffocate philosophy, art and research), suppression of freedom of expression for artists, journalists and writers, the punishment of those in the media who disagree with their government, and the practicing of any religion other than Islam (witness the recent attacks on Copts and Christian Coptic churches in Egypt).

In his blog, analyst Daniel Greenfield also notes…“If the Brotherhood achieves its aims, the military will be taken apart and replaced by an Iranian-style Revolutionary Guard. That process is already underway in Turkey where there are more generals in prison than on the front lines. But if the military waits out all its rivals and then picks up Western support for stabilizing Egypt, then a new Mubarak will be in power.”

All this should lead the Western powers to reflect on the true meaning of democracy. It is much more than the process of voting in free elections.

Read article in full
Posted by bataween at Monday, November 28, 2011

the countries to which we can go for tourism are shrinking day by day!!!
We must live accord!ng to our principles.
My physiotherapist was amazed that I did not buy Iranian pistaccios. He asked is it by conviction£, Yes, I replied.
If every Jew lived by his convictions it would be a way to make these despots fall.

I never went to Spain as long as Franco lived. Did I deprive myself of something great: certainly not!!!
suzy vidal