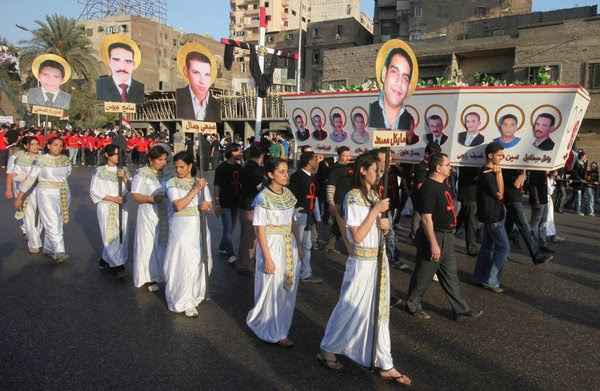 Coptic Christians, carrying a symbolic coffin with photos of people killed in clashes, marched from the Coptic Cathedral in the Abbasiya section of Cairo earlier this month.(Photo: Khaled Elfiqi)

Egypt has always had a tradition of blaming others for its own misdemeanours, and has failed to learn the lesson that the persecution of the Jews, and now the Coptic Christians, only hurts the country as a whole. Andre Aciman writes in the New York Times:

THE images streaming from Cairo’s streets last month were not as horrifying as those of the capture and brutal death of Col. Muammar el-Qaddafi, but they were savage all the same. They were a sobering reminder that popular movements in some parts of the world, however euphorically they begin, can take disquieting and ugly turns.

When liberal Muslims joined Coptic Christians as they marched through Cairo’s Maspero area on Oct. 9 to protest the burning of a Coptic church, bands of conservative Muslim hooligans wielding sticks and swords began attacking the protesters. Egyptian security forces who had apparently intervened to break up the violence deliberately rammed their armed vehicles into the Coptic crowd and fired live ammunition indiscriminately.

Egyptian military authorities soon shut down live news coverage of the event, and evidence of chaos was quickly cleared from the scene. But the massacre, in which at least 24 people were killed and more than 300 were wounded, was the worst instance of sectarian violence in Egypt in 60 years.

Confusion and conflicting narratives abound. Some claim to have overheard an announcer on television encourage “honorable Egyptians” to come to the rescue of soldiers under attack by a mob of Copts. Others heard a Muslim shouting that he had killed a Christian.

Unable to explain exactly why events turned violent, Egypt’s interim prime minister, Essam Sharaf, claimed that the wholesale slaughter of civilians was not the product of sectarian violence but proof that there were “hidden hands” involved.

I grew up in an Egypt that was inventing hidden hands wherever you looked. Because of my family’s increasingly precarious status as Jews living in Nasser’s Egypt, my parents forbade me to flash my flashlight several times at night or to write invisible messages with lemon ink in middle school. These were a spymaster’s tricks, and Jews were forever regarded as spies after the 1954 “Lavon Affair,” in which Israeli intelligence recruited Egyptian Jews to bomb targets in Egypt.

Sadly, the phrase “hidden hands” remains a part of Egypt’s political rhetoric more than 50 years later — an invitation for every Egyptian to write in the name of his or her favorite bugaboo. Rather than see things for what they are, Egyptians, from their leaders on down, have always preferred the blame game — and with good reason. Blaming some insidious clandestine villain for anything invariably works in a country where hearsay passes for truth and paranoia for knowledge.

Sometimes those hidden hands are called Langley, or the West, or, all else failing, of course, the Mossad. Sometimes “hidden hands” stands for any number of foreign or local conspiracies carried out by corrupt or disgruntled apparatchiks of one stripe or another who are forever eager to tarnish and discredit the public trust.

The problem with Egypt is that there is no public trust. There is no trust, period. False rumor, which is the opiate of the Egyptian masses and the bread and butter of political discourse in the Arab world, trumps clarity, reason and the will to tolerate a different opinion, let alone a different religion or the spirit of open discourse.

“Hidden hands” stands for Satan. And with Satan you don’t use judgment; you use cunning and paranoia. Cunning, after all, is poor man’s fare, a way of cobbling together a credible enough narrative that is at once easy to digest, to swear by, and pass around. Bugaboos keep you focused. And nothing in the Middle East can keep you as focused (or as unfocused) as the archvillain of them all: Israel.

Say “Israel” and you’ve galvanized everyone. Say Israel and you have a movement, a cause, a purpose. Say “Israel” and all of Islam huddles. Iran, Hamas, Hezbollah and now Turkey.

What is good about the episode in Maspero is that, in the exhilarating and unusual spirit of the events of last spring in Tahrir Square, Muslims joined the Coptic demonstrators who were eager to exercise the right to build churches — a right that has always been grudgingly granted to Egypt’s Copts.

What is terrible about the episode, however, is the inability of the government to take the blame for the slaughter of the Copts. Similarly, in September, it failed to intervene in good time when a large mob attacked the Israeli embassy in Cairo, broke down its walls and nearly slaughtered those inside.

Posted by bataween at Wednesday, November 23, 2011