Antisemitism is the opium of the Egyptian people 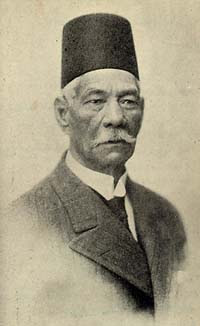 The musings of Abu Faris, a regular commenter on Harry's Place, are always worth reading, and all the more worth preserving because the blog deletes comments threads after a few days : Abu Faris brings in the kind of insights that only a person living in Egypt can.


"My colleague’s husband and I fell into a conversation about Arabs and Jews the other day; and he quite silenced me.

"He completely agreed that Jews have been scapegoated by those seeking power in Egypt and those seeking to retain it. He recounted the Wafd Party’s organisation and encouragement of anti-Jewish and anti-Christian pogroms to leverage the British into constitutional concessions in the period between the two World Wars. He noted that the Wafd were enormously popular and it could raise a firestorm simply by giving the word. The Wafd’s greatest leader, he pointed out, was this ruthless: Sa’d Zaghlul Pasha was, he underscored ironically, however also one of modern Egypt’s greatest heroes.

"He talked of Nasser in a way I have rarely heard an Egyptian speak. He despised him and blamed him for the continuance of Egypt’s woes – which he averred where much the same sort of ills as had benighted Egypt since the time of Khedive Muhammad ‘Ali at the back end of the Napoleonic Wars. Soldiers have been in power in Egypt for thousands of years, he pointed out helpfully – and now, guess what? We have more soldiers in charge.

"He not only recognised Israel’s right to existence; but also her definition as a Jewish state. There are Arab states, Egypt is the Arab Republic of Egypt. Why not a Jewish one? He thought the expulsion of Egypt’s Jews was not only a damning indictment of Nasser’s quasi-fascist demagogy and popularism; but fairly indicative of the degree to which anti-Semitism had pervaded the soul of the Egyptian people. He misquoted Marx: anti-Semitism is the opium of the Egyptian people. And we don’t much like Copts much either, he added. And he exploded: see how they rule us? And we will let them do it again, this is true, if we let them – and we always have before.

antisemitism is a chronic illness in Egypt.
One day my nonno (grandfather) heard an Egyptian officer say: my wife is a very good woman, the only problem about her is that she is Jewish"
My nonno turned to him and said: "aren't you ashames to talk like this about the mother çf your children?
my nonno was only 1.48 cms but he was fearless and sensational.
suzy vidal

My Nono wore a tarbush tilted on its side, sitting in a cafe at Gizah smoking the nargila, speaking to British officers, He was the lieson between the stone age and the very modern, Speaking more than 8 languages, was a frequent visitor in King Farouk royal courtyard, imagine with a name like Cohen? Those were the days.

so did my nonno Abraham wear the tarbush but he only spoke Arabic (Egyptian). he had an Egyptian nationality as well but was stripped of it because he was Jewish!
suzy vidal