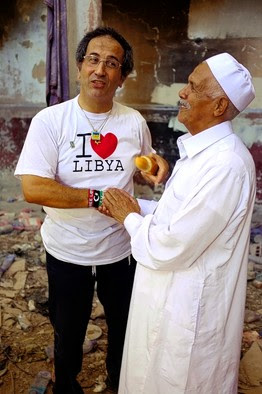 David Gerbi's re-opening of a Tripoli synagogue* has attracted much media coverage, but Charles Levinson in the Wall Street Journal is the only one to point out that Gerbi acted with the support of local residents, without the permission of the new rebel government. The new regime is not willing to address 'the Jewish issue' yet, and even fears for Gerbi's safety:

Libya's new leaders have taken historic steps to empower other long-persecuted minorities, including the country's Berbers. But the return of Libyan Jews is certain to prove a far-more-sensitive issue.

All but a handful of Libya's some 40,000 Jews fled the country between the establishment of Israel in 1948 and the Six Day War in 1967. Mr. Gerbi said those Jews and their descendants now number around 200,000.

Many of the Jews who fled, including Mr. Gerbi's family, left behind substantial property holdings. Any attempts to reclaim those properties, as Mr. Gerbi said he would like to do, would likely worsen a relationship already marred by decades of mistrust and simmering hatred.

In Libya, as in much of the Arab world, animosity toward Israel has often translated into vehement anti-Semitism. One of the more common swipes at Col. Gadhafi in recent months by Libyans was the widely believed allegation that he had Jewish grandparents.

Further complicating the question of how to handle Libya's Jewish diaspora, most of the Jews emigrated to Israel and are now Israeli citizens. Even most Libyans who fully support the repatriation of Libyan Jews say that shouldn't include those who went to Israel.

Still, Mr. Gerbi said his request for formal permission to reopen the synagogue was totally ignored. NTC officials responded coolly to the news of the synagogue's reopening, calling it premature to tackle such a sensitive issue. It was unclear whether they would allow Mr. Gerbi to go forward with his plans to renovate and restore the synagogue or would move to stop it.

"It should be no problem, but this isn't the time for it," said NTC spokesman Jalal el-Gallal. "This is an issue that needs to be addressed, but only when there is a stable and legitimate elected government in place."

Mr. Gallal said he feared an attack by even a single lone extremist against Mr. Gerbi could derail the new leadership's efforts to establish a stable and functioning government and be used by critics to discredit the new government in U.S. and European capitals.

Lacking formal government sanction, Mr. Gerbi said he instead secured the support of residents surrounding the synagogue. He won the backing of the local militia that helped secure the neighborhood in the wake of Col. Gadhafi's fall and from a pair of clerics who serve as imams at the local mosque.

Throughout the day, neighbors trickled into the synagogue, stepping gingerly through the cinderblock rubble, charred mattress springs, and rotting pigeon corpses that covered the floors of the sanctuary, tucked deep inside Tripoli's decaying and labyrinthine old city.

Local residents, some with their children in tow, marveled at a site that had been sealed off for decades. Several offered to pitch in and help clear out the rubble. Others voiced alarm.

Still, the vibrant debate in the heart of Tripoli between Libyan Muslims and a lone Libyan Jew proudly sporting Jewish garb was a spectacle that would have been unthinkable just a few months ago in Libya, and remains an exceedingly rare sight throughout the Arab world.

"I've watched the Jews attack the Palestinians. What if they turn against us? The Jews are no good," said 39-year-old Ali Jamal, another neighbor.

Mr. Jamal's neighbor, Abdel Majid, 43, challenged his friend and neighbor. "This is freedom," he said. "I shook [Mr. Gerbi's] hand. I hugged him. He's Libyan, it's his right to return to his country and practice his religion."

When Sheik Jamal Abdullah, one of two local Muslim clerics who signed off on the temple's reopening, arrived, Mr. Gerbi ushered him into the sanctuary, to the ark that once held the congregation's Torah scrolls.

Mr. Gerbi pointed to the faint remains of a Hebrew inscription pledging fealty to God above the ark. "Here is the name of God, your God, my God," he said. "Is it right that the name of God will reside among all this garbage?"

The elderly imam in a white robe and skull cap clutched Mr. Gerbi's hands. "We must clean this up," he said. "Only when Jews and Muslims again live together, will there be no more war, no more fighting."

I do not know if this is courage or madness.
Why in the world would annyone want to go back to Lybia?
Concerning the rumour that Gadaffi had Jewish roots, they said the same of Nasser. But it was not true and that because his father was a civil servant(postman) and that Jews could not hold state jobs!!!So the tables were turned non those who spread that rumor.
suzy vidal

And it even made it in Haaretz thanks to Reuters...
http://www.haaretz.com/jewish-world/libyan-jew-returning-from-exile-barred-from-tripoli-synagogue-1.387902

Gerbi should talk to BHL while he is still popular with the Libyan rebels. That too could change, though..

It's neither courage nor madness. It's just ignorance. Now that he brought that synagogue to the attention of clerics you can be sure they'll want to turn it into a mosque.
Jews and Christians can't repair their synagogues nor build new ones - which is the reason he was banned from that synagogue as soon as he said he wants to repair it.

I think that Gerbi is a psychiatrist. That may explain why he entertains illusions.

we must let Mr Gerbi live his dream.
We must not deprive him of that. He will learn soon enough that he will be rejected as Jew.
suzy vidal