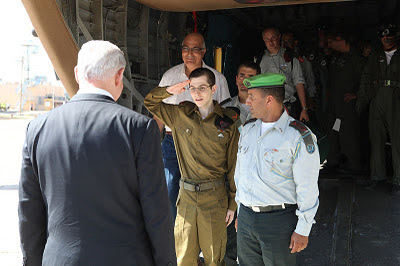 Egyptian Jews can be proud that one of their own was instrumental in successfully negotiating the release of Gilad Shalit after five years of captivity in Gaza.

His name is David Meidan (Mosseri), who has worked for Mossad for 30 years. The Arabic-speaking head of Tevel, the branch in charge of cooperation and intelligence-sharing with foreign intelligence services, Meidan was appointed by Prime Minister Netanyahu as his special envoy to take part in the Shalit negotiations six months ago. Israeli TV has said he played a major part in securing the young hostage's freedom, his contacts with Egyptian intelligence proving crucial.

Meidan was born in Egypt in 1955. At the age of two he was brought to Israel by his parents Rose and Nathan Mosseri, and later changed his name to Meidan.
Posted by bataween at Thursday, October 20, 2011

this text just shows how important it is to have Egyptian or former Egyptian Jews in key posts. They can speak Arabic and deal with these nuts
suzy vidal
Levana ya helwa, Rabena ye khaliki!

I happen to have the picture of the Moseri villa, in Cairo which is now occupied by some Diplomatic attache, My uncle Jasque Cohen the Macabi Champion Boxer was often invited to the Moseri home.
http://nona-cutthebull.blogspot.com

CONGRATULATIONS MR. MEIDAN - MOSSERI
THIS NAME MEANS A LOT TO ME AND MY FAMILY. MY FATHER YOMTOV LEVY-TANTAWI WORKED FOR THE BANK 'MOSSERI' IN CAIRO ALL HIS LIFE UNTIL HE DECIDED TO LEAVE EGYPT WITH THE WHOLE FAMILY,ON 1952 FOR ISRAEL LUCKILY HE DID NOT WAIT FOR THE 'EXPULSION" !! I BELIEVE THAT - IN A WAY -THE OWNER OF BANK MOSSERI WAS ACQUAINTED TO MR. MEIDAN'S FAMILY, BECAUSE THIS WAS A VERY BIG FAMILY . WISH YOU ALL THE BEST MR. MEIDAN AND 'UNE GRANDE REUSSITE DANS TOUT CE QUE VOUS ALLEZ ENTREPRENDRE'. MARCELLE PERETZ HAIFA

I am happy to see that more and more Egyptian Jews express themselves on your blog.
I know Leone too. it's a small Jewish world!!!
suzy vidal