Moroccan Holocaust conference has its dangers 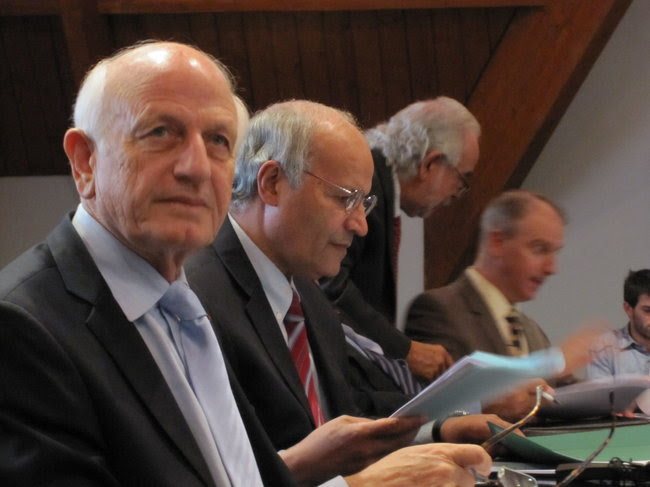 The leftwing press has been waxing ecstatic over a conference organised in Morocco on the Holocaust. While this event - apparently an initiative by Moroccan students - is praiseworthy, it does have its inherent dangers, as I have explained in my comment below: (with thanks: Michelle)

This from The New York Times:

One afternoon this week, President Mahmoud Ahmadinejad of Iran addressed the United Nations General Assembly, once again casting doubt that the Holocaust had occurred. Almost exactly 24 hours earlier, an otherwise obscure college student in Morocco named Elmehdi Boudra was convening a conference devoted not to denying the Holocaust but to remembering it.

Mr. Ahmadinejad’s speech, not surprisingly, made major news around the world, as had his similar pronouncements in earlier years and his Tehran convention of Holocaust deniers. Mr. Boudra’s conference, meanwhile, attracted virtually no media attention of any kind.

Yet it should have been trumpeted, all the more for its coincidental timing. While Holocaust denial or denigration in the Muslim world is a sadly familiar phenomenon, hardly news at all, the conference put together by Mr. Boudra and several dozen classmates, all of them Muslim, may well have been the first of its kind in an Arab or Muslim nation, and a sign of historical truth triumphing over conspiracy theories and anti-Semitic dogma.


"During World War Two, when Morocco was occupied by the French, who were in turn occupied by the Vichy regime that collaborated with the Nazis, Moroccan King Mohammed V is said to have protected the Jews living in his domain from suffering the fate that befell the Jews of Europe. On March 18, 2009, his grandson, the ruling monarch Mohammed VI, honored that tradition of inter-religious solidarity when he publicly proclaimed that he and the Moroccan people perceive the Shoah "as a wound to the collective memory, which we know is engraved in one of the most painful chapters in the collective history of mankind."

While Muslims came to the conference to learn more about Jewish history, the Kivunim students were also there to learn about the history of Muslim-Jewish cooperation. Conference participant and 2009-10 Kivunim graduate Aaron Weinberg, whose parents are both Jewish educators in Chicago, was so moved by what he learned of Morocco's Jews that he decided to make them a focus of his post-secondary education at Brandeis University. He says that the extraordinary alliances between the Moroccan Muslim and Jewish communities which existed prior to the emigration to Israel of most of the latter in the 1950s represents a positive model for Jewish-Gentile relations that should be taught in Jewish schools, alongside the history of the Holocaust.

"The Shoah was a tragedy unparalleled in the history of the Jewish people," says Weinberg, but he is concerned that Holocaust horror stories might be eclipsing all other Jewish narratives. "How we teach our children about the Holocaust should be a centerpiece of Jewish education, but should not be the end-all and be-all," he says. "Jewish history is not: 'They wanted to kill us; we won; let's eat!'" Weinberg says he is frightened by a trajectory of Jewish pedagogy that teaches fear of the other. "There are forces within our community that are trying to undermine those of us who are trying to build bridges between peoples," he says.

My comment: I've said it before and I'll say it again: while conferences such as this one are a useful antidote to the Holocaust denial propagated by Iran, they have the effect of sanitising Arab complicity with Nazism and the suffering of Jews in Arab countries during and immediately after the Nazi era. The postwar ethnic cleansing of Jews from the Arab world followed a Nazi pattern of persecution and dispossession in much of the Arab world.

In its zeal to project a narrative of Jewish-Muslim cooperation, Kivunim is indulging in dangerous revisionism. Did the conference mention the hundreds of Jewish ex-soldiers who died in wartime labour camps in Morocco, as described by Robert Satloff in Among the Righteous? Such conferences idealise the role of the Moroccan king in 'protecting' the Jews, when he did not have real power. Jews were shunted back into their ghettos, sacked from jobs, restricted in their movement, deprived of education, all on his watch.

It is no wonder that Jewish community leaders in Morocco take part enthusiastically in these exercises: it's their survival strategy. But did this conference ever pause to wonder why only 3,000 Jews remain in Morocco out of a community of 300,000?

The conferences end up being counter-productive by projecting a false history of Arab and Muslim innocence. They highlight European antisemitism while whitewashing Arab and Muslim antisemitism. They lead to invidious comparisons with the Nazis in Israel's 'treatment of the Palestinians.' It is questionable whether such events can really bring about peace and reconciliation between Jews and Arabs, when they are built on distortions of the truth.
Posted by bataween at Sunday, September 25, 2011

our history i.e. that of Jews is a trail of horrors and injustices.
But we must fight back, not with arms but with words and intelligence. I do not know who said :
The pen is mightier than the sword,
we have enough intelligent people to defend us in this manner!
Let us not come down to the level of fools (you know who I mean!)
suzy vidal

This absolute nonsense from beginning to end. All that will happen is some vague statements that the Shoah 'may have happened' to be followed up by obligatory Arab spokesmen bludgeoning Israel with the Shoah vis a vis the 'palestinians' e.g. 'How could YOU of all people do this?????

This should be completely boycotted by all Jews

I don't think anyone in the Arab/Muslim world believes it didn't happen. They'll lie when they're told it's their interest to lie. The Moroccans however, can't deny it without denying the history they're taught. There is even a statue or a monument of Mohammed V in Paris as the Monarch who has saved his Jewish subjects from deportation. Denying the Holocaust would require some mental gymnastics on their part.