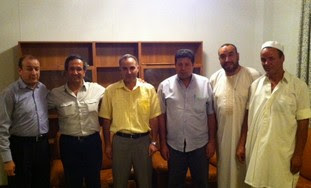 David Gerbi (second from left) with his Berber rebel friends

David Gerbi, newly-appointed representative of the World Organisation of Jews from Libya, is forging an exciting new alliance with the repressed Berbers (Amazighen) of Libya who identify strongly with the Jews. A trip by Berber members of the National Transitional Council to Jerusalem may be on the cards, The Jerusalem Post reports:

Gerbi, a Jungian psychoanalyst and Libyan-Jewish exile living in Italy, has been to Libya on several missions over the past decade, driven by a desire to restore the two-millenniumold Jewish-Libyan heritage and return to his erstwhile home as a free citizen. The “Udai ugrauli” proudly displays his three legitimate identities: Italian, Libyan and Jewish. As Gerbi spoke with The Jerusalem Post via Skype from a rebel outpost in the mountains on Friday, gunshots could be heard in the distance.

After a week of volunteer service in the Benghazi Psychiatric Hospital last May, helping to treat victims of post-traumatic stress syndrome, Gerbi decided to cast his lot with the National Transitional Council rebels. He again left Italy and went to Tunis in August, where he met with Fahdel Hshad, an Amazigh whom David Gerbi met at the Benghazi Tibesti Hotel with the other NTC members. Hshad, considered a great though humble leader, has lived exile for over 30 years, having been among the first in the opposition to refuse to recognize Muammar Gaddafi. This was his first trip home in three decades. Hshad and other Amazigh NTC members escorted Gerbi to the Amazigh town of Jadu in western Libya where, during World War II, Italian Fascists and others erected a concentration camp that interned 2,600 Jews.

Gerbi was warmly welcomed by the chairmen of town councils, all members of the NTC, respectively: Moussa Younes of Jado, Dr. Mustafa Razabani of Rajban and Tayeb Ahmed of Jefren along with the general population who recalled the good things their grandparents had told them about Jews.

Among many invitations, Gerbi “sat shiva” in mourning the Galiza family (200 members), sitting in a small circle on the floor with everyone eating from one plate.

Gerbi was brought to the Jewish Cemetery where headstones lie in disarray, with a couple of Hebrew inscriptions on fragments. He recited a symbolic Kaddish over Ner Neshamot (Yahrzeit candles) on a child’s tomb, lighting three candles in memory of the Jewish dead, including approximately 600 interned men, women and children who died of typhoid in the camp during WWII.

The Amazigh National Transitional Council members offered Gerbi the possibility of fencing off the cemetery and restoring the tombs.

They plan to organize an inauguration ceremony three months from now with the presence of a delegation of ten Jewish Libyans to form a Minyan. In return, the Amazigh members of the Libyan NTC will be invited as a pilgrimage delegation to Jerusalem.


Read article in full
Posted by bataween at Monday, September 05, 2011

Email ThisBlogThis!Share to TwitterShare to FacebookShare to Pinterest
Labels: Jews of Libya, Jews/Berbers

I am a blood relative of the women whom you question. There is no doubt of her nobility and love for her people. How many warrior queens are willing to sacrifice themselves for there country. My grandmother was no weak women whom you push back in the history books and ignore because of her skin color. She is not Elizabeth Taylor. She worked hard as a nomad. A Nobody that took courage to be the greatest women of courage that I have always looked up. My story of her was passed down by my grandmother Louise Owens and her grandmother and her grandmother. Etc, Etc. If you only knew the true sacrifice of my family. I am so angry when someone's legacy is fought over about skin color. When will American just get over who's black and who's white. We all have red blood. My grandmothers blood was red and her head on a platter for her people. Praise her. Don't crucify her again. Ignorant and uneducated about her.

We have the original airlums of my queen african grandmother. We always were the keeper of her legacy. Just know that her seed didn't die in africa. We may not be dukes and princess of wales. We are here. Watching. Waiting for one of us to rise and again take the rightful throne of our beloved Queen Kahina. Her bloodline didn't stop.