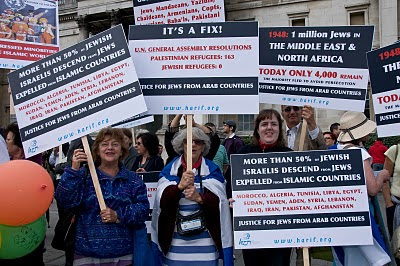 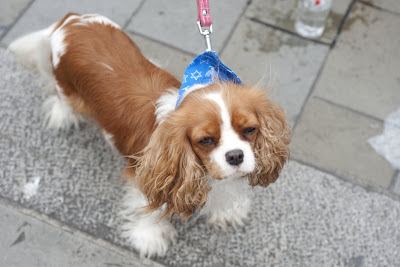 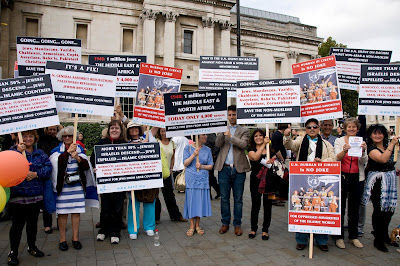 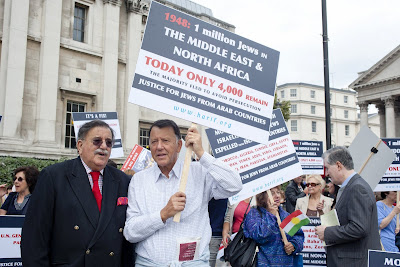 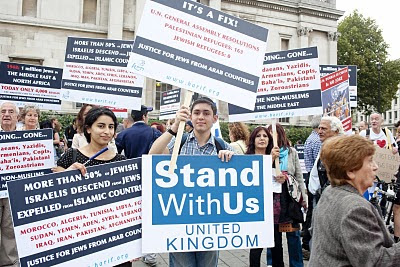 In the week of the UN's Durban 3 charade, Harif, the UK Association of Jews from Middle East and North Africa, held its first ever protest rally on behalf of the forgotten refugees of the Middle East and the wider Muslim world. It was a good-natured affair, as 100 or so demonstrators in London's Trafalgar Square drew attention to the UN's hypocrisy.

The demonstrators held balloons, distributed sweets and carried placards pointing out that the Durban 111 conference* against racism was 'no joke for oppressed minorities'. They drew attention to the ethnic cleansing of the indigenous Jews of the Middle East - down to 4,000 in Arab countries from a 1948 figure of almost one million. The UN and international community has ignored them, preferring to pass resolution after resolution on Palestinian refugees, and condemn that beacon of democracy and pluralism - Israel.

The mood was cheerful in September sunshine, with bystanders stopping to express interest or sympathy, and only a few confrontations. Kurds turned up to show solidarity, and the human rights campaigner Peter Tatchell sent a message of support.

Crossposted at Elder of Ziyon

While the United Nations controversial "Durban III" conference against racism took place in New York, protesters gathered in Trafalgar Square to highlight the plight of Jewish and other persecuted minorities driven out of the Middle East and North Africa.

Organised by Harif, which represents Jews from the Arab world, the British Israel Coalition and Stand With Us UK, around 100 demonstrators handed out leaflets on Sunday to tourists and waved Israeli flags.

Lynn Julius of Harif, whose family fled Iraq, said: "We have been forgotten by the world and the UN. We are here on behalf of all the forgotten refugees, the Kurds, the Berbers, Assyrians, Copts and Baha'is. "

Moroccan-born Sydney Assor, a member of the Board of Deputies, said: "This is the first occasion there has been to remind us of forgotten causes. It's not just about the Jewish refugees, Christians are disappearing from the Middle East."

Jews of Iraqi, Tunisian and Syrian descent were also in attendance. Ms Julius said: "We are really pleased to see such support from Ashkenazi Jews, too. This issue is the key to peace. Palestinian refugee issues currently monopolise the debate."

Ari Soffer, an activist with the British Israel Coalition, spoke of his family's escape from Baghdad. "My father would be heartened to see everyone here. He has always felt betrayed by the UN. When he left Iraq, the only country that would accept us was Israel. If I were a Palestinian, I would be considered a refugee myself, even though I was not born in Iraq. No other nationality has that status. There should be no more double standards."

He said there had been a mixed response from passers-by. "We have had a few people shout and disagree, but a lot think it is a purely pro-Israel protest, because of the flags. But, when you explain, people are interested."

Kurdish writer Azad Miran also attended the protest in support of refugee rights. He said: "We have suffered for a long time, but the UN is mostly concerned with Palestinian people. We have been labelled terrorists when we fight for our freedom."

I like the signs. They are to the point and dignified.

God is Jewish!
He gave us a glorious sunny day for that demonstration!
suzy vidal

it's time for me to wish all of my Jewish friends a
happy Rosh Hashana
May we all be here next year to exchange our greetings. No one can crush us!!!
suzy vidal

Kol Hakavod to all of you. Lovely photos. Well done for organising it. My thoughts were with you. Sorry I couldn't make it. Wishing you all a Shana Tova and a peaceful one for all of Israel and its people everywhere

Do Jewish refugees have citizenship of the countries they are in now? Because the problem with the Palestinians is that most of them do not have any citizenship, that's why they are still called refugees.