Roll up! Roll up! Time for the UN to stage its third Durban circus, an Israel-bashing exercise masquerading as a conference against racism, racial discrimination, xenophobia and related intolerance. The conference begins in earnest today - when President Ahmadinejad of Iran addresses the chamber - and is expected to serve as a platform for the very racism and intolerance it purports to condemn.

To their credit, 14 countries have withdrawn from Durban lll, but that leaves 178 who haven't. So we have the absurd spectacle of the world's worst human rights abusers condemning the only beacon of pluralism and tolerance in the Middle East - Israel. It would be a joke - if it were not so tragic.

This year, however, Jewish activists are not sitting back and letting the UN get away with its hatefest. Yesterday they organised a protest at Dag Hammerskold Plaza in front of the UN building in New York. The demonstration included a contingent of Jewish refugees from Arab countries (see picture above).

The organisers have invited representatives of other oppressed religious and ethnic minorities from Arab lands and the wider Muslim world to attend - Christians, Mandaeans, Copts, Pakistani Christians, Zoroastrians and Baha'is, Muslim sects such as the Sufis and Ahmadis, together with Assyrians, Kurds and Berbers, whose cultural, linguistic and national rights have been suppressed.

If you agree that the real problem in the Arab and Muslim world is Arabist racism and Islamist religious fascism, please come and show your support at the North Terrace, Trafalgar Square, Central London, on Sunday 25th September at 3pm. 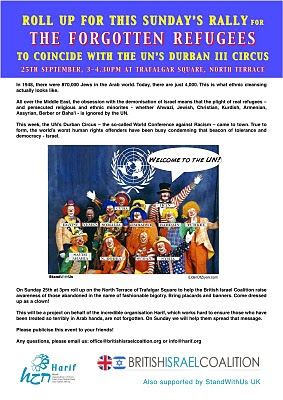 Posted by bataween at Thursday, September 22, 2011

Is it Possible to tell why the other 50% came to "Promise land" so can we count them also as "Jewish refugees" BUT from other part of the world? Aren’t they?

As for Human Rights you bring here in your post you should well reminded that your early "Israeli Leaders" well regarded as war criminals and they selected to head of state refused more than 100 UN resolutions dealing with international community and many regarding Human Rights abuse and war crimes against indigenous people on the land of Palestine.


I leave you to read through in hope to help you understanding your case better:

"he oriental Jewish Communities were not a part of the Zionist plan which essentially was a European, colonial one. Only after the creation of Israel did Israeli leadership turn their attention to the Arabic/Jewish Community." Abbas Shiblak, expert on Iraqi Jewry continues to comment on what happened then: "For me, as a refugee and a Palestinian Arab, the experiences of Iraqi Jews and all other Arabic/Jewish Communities are largely one of otherness" - loss, uprootedness and rejection.

If one believes the Jewish Iraqi participant in the conference, "Remember Baghdad," which was organized by the Austrian Institute for International Politics (OIIP) and numerous other organizations, then it was not a particularly happy return to the promised land. The preliminary events leading up to- and the circumstances surrounding the exodus of Jews out of Iraq, which were related to the other participants at the conference, differ considerably from those of the Israeli mainstream narrative: it was, above all, one of "transfer" run by Zionist leadership.

Deliberate Transfer
That the Jews had to leave behind their possessions - an historical view that involves only the Arabic countries - was, according to the sociologist, Yehouda Shenhav, deliberate: in order to protect Israel from Palestinian claims for compensation. Therefore, Israel supported no individual demands from Iraq made by the Iraqi Jews: "It was important that it remain "collective".

Even in Israel itself the Iraqi immigrant expected a "systematic cultural cleansing," said Nisim Rejwan with great bitterness at the conference. He left Baghdad in 1951. By citing quotes from David Ben Gurion and Golda Meier, the eighty year-old Rejwan highlighted the colonial arrogance felt by the Eastern Jews at the time of integration.

The author, Sami Michael, discovered that the ideological dictates of the Zionists made a neutral non-partisan depiction of the life of the Jews in Iraq impossible. Now these Jews want their history back. In fact, consideration is being made of a new museum, since the one in Tel Aviv fails to mention any Iraqi Jewish leader who defied Zionism.

There was a broad consensus at the conference that giving the term "Jew" an ethnic twist in the Arabic world results from the Israelis having put a stamp on the opposites of Jew/Arab: In Baghdad, there were Arabic Muslims, Arabic Christians and Arabic Jews. It was scarcely mentioned that the bitter history of European anti-Semitism and the Holocaust had started here: the Austrian listener should, however, not forget it.

Common Music
The Arabic identity of the Iraqi Jews was celebrated at the beginning as well as at the end of the conference: Whereas the first part of the conference was dedicated to remembering times of division, the second day shared a sense of unity of "Oud Festival" (Arabic sounds) with Jewish and non-Jewish Arabic musicians from different generations playing music together.

I'm sorry but Shenhav and
Sami Michael are far-left radicals do not speak for the overwhelming majority of Iraqi Jews. A conference of Iraqi Jews in Israel rejected any notion that the Iraqi Jews want to be Arabs'. A liking for Oud music certainly does not make one an Arab.
The fact that the oriental Jews were not Zionists means they did not come to Israel of their own free will - their forced exodus is undeniable.
You are just indulging in apologetics for Arab antisemitism. What is your explanation for the 1941 Farhud? No doubt the Zionists caused that too.

You know what you'r like Crimanl Bush and his Co when he said:

"Either With US or Against US"

we have troll every color, if you believe in open minded discussion you should seek treatment for your "FAR RIGHT Radicals " then come to listen to other people what will say.

Simon Sebag-Montefiore bends over backwards to give equal weight to Christian and Muslim claims to Jerusalem. This kind of political correctness we can do without. Yaacov you have your work cut out!


Is Simon Sebag far-left radicals, also in your own color?

Good luck reminding you with your hope "'Without truth, there can be no justice, and without justice, no reconciliation.' do you work on this advise you have stated by yourself, please follow it for the sick of truth.