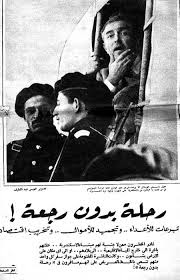 No return to Egypt: Jews were summarily expelled from Egypt in 1956 (photo: HSJE)

Egyptian-Israeli relations were pulled back from the brink when Egyptian commandos narrowly averted the lynching of the Israeli embassy staff in Cairo by a vicious mob last Friday. Richard Cohen in The Washington Post is among few commentators to put this disaster-in-the-making in its proper context: it is the result of decades of anti-Jewish bigotry. Cohen goes back to 1953, but he could have gone back to the rise of the Muslim Brotherhood in the 1930s. Or at least to 1948 - when an light-skinned Egyptian Muslim complained that he had been beaten up more than once just for looking Jewish*.

Back in 1953, an Egyptian army officer was asked by the magazine Al-Musawwar what he would write to Hitler if he were still alive. “My Dear Hitler,” he began gushingly, “I admire you from the bottom of my heart.” He proceeded to extol the German dictator for, among other things, creating dissension between “the old man Churchill and his allies, the sons of Satan.” If the mass murder of Jews bothered the officer in the least, he did not mention it. Years later, as the president of Egypt, he was himself murdered for making peace with the Jewish state. His name, of course, was Anwar Sadat.

The peace that Sadat manufactured is now unraveling, a thread here, a thread there. The Israelis and the Egyptians have traded insults of all sorts, and now the Israeli Embassy, always an edifice constructed out of wishful thinking, has been sacked by a Cairo mob. The Israeli ambassador is gone, and when he will return, if ever, is not clear.

The Israeli-Egyptian peace is in jeopardy, and so is the cordial rapport Israel once had with Turkey. Along with Iran and Ethiopia, Turkey helped make up what was called “the strategy of the periphery,” the relationship that Israel’s founding prime minister, David Ben-Gurion, established with non-Arab nations. But Iran now is Israel’s mortal enemy, Ethiopia hardly matters and Turkey is bristling with hostility. Ankara wants Israel to apologize — not merely express regret — for its perfectly legal attempt to turn back a so-called humanitarian flotilla heading for Gaza last year. Nine people died. Israeli forces overreacted and now Turkey is doing the same.

Israel’s dilemma is that the Middle East, for all the talk of revolution, is slipping backward. Turkey is possibly evolving into an Islamic republic and even if this is not the case, it is reasserting its historical role as a regional power. Iran toppled its modernizing, Westernizing shah with his pro-Israel proclivities and in 1979 became a theocracy. And Egypt, long the leader of the Arab world, may find it cannot lead its own people. The peace with Israel has little support among the populace. It’s not just that Israel is not loved, it’s that Jews are hated.

Think back to Sadat writing his pretend letter to Hitler. This was eight years after the ovens of Auschwitz were demolished and much of the world was coming to grips with the enormity of the Holocaust. Yet not only could an Egyptian magazine solicit such letters, but an army officer with the intellectual wherewithal to someday run the country was an entrant. This suggests a society in which the Holocaust was thought to be either a Jewish concoction, a Jewish exaggeration or some sort of just deserts.

Since those days, the situation has evolved but not necessarily improved. Egyptian society, indeed the entire Arab world, has been drenched by a steady drizzle of government-approved or -tolerated anti-Semitism. It would take willful historical ignorance to dismiss the possible consequences. There are almost no Jews left in Egypt — the substantial community was expelled, first by Gamal Abdel Nasser and then by incessant oppression and fear — but there are plenty of Jews just over the border in Israel.

*From La Bourse Egyptienne, as quoted in The Legacy of Islamic Antisemitism by Andrew Bostom, p 669

Not many people know that the man who had the guts to go to Jerusalem and shake hands with Golda, was formerly an admirer of that despicable German leader.
But we have to put things into their context. Anwar el Sadat was hoping that the Germans (if they won) would rid them of the hated English who had practically taken over Egypt.
I watched his arrival in Israel with all my family, we all had tears in our eyes.
His past was redeemed by his present: only fools never change their minds (I was told several times)
He paid very dearly for his change of attitude.
But let us be certain of one thing: the hatred for Jews in Egypt is a never ending story.
Thank God we are no longer there!
Dayenou!
suzy vidal a former Jewish refugee from Egypt

Yes of course Sadat changed course - he went from being a pro-Nazi to a peacemaker. A pity he never survived long enough to witness that peace with Israel.
Very quickly, however, the peace with Israel became 'cold', and official antisemitism under Mubarak increased 100,000 fold. So we have the paradox of peace coexisting with Jew-hatred.