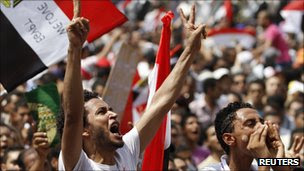 A rare and shocking admission, from the BBC, no less, that antisemitism in Egypt has reached such hysterical heights that one of its own reporters was assaulted 'for being a Jew'. Chillingly, had reporter Thomas Dinham been Jewish, the violence would have been justified:

"I would hazard a guess that Israel struggles to make it into the top-five political issues discussed in Egypt.

Israel has probably been less of a concern than the rising power of Shia Iran in the region, which apparently worries many in this overwhelmingly Sunni country, partly thanks to a constant stream of stridently sectarian rhetoric broadcast from Saudi Arabia.

In the Byzantine politics of the region, hearing strident opposition to Israel and its greatest regional foe, from the same person, almost in the same breath, is commonplace.

Nevertheless, a strong and sometimes violent dislike of Israel is a fact of Egyptian life, something I was unfortunate enough to discover after a cross-border raid by Israel killed several Egyptian security personnel.

The Israelis had been chasing a group of gunmen who had attacked an Israeli bus close to the border between the two countries.

While walking in the street someone pushed me from behind with such force that I nearly fell over.

Turning around, I found myself surrounded by five men, one of whom tried to punch me in the face. I stopped the attack by pointing out how shameful it was for a Muslim to assault a guest in his country, especially during Ramadan.

Relieved that a seemingly random assault was over, I was appalled by the apology offered by one of my assailants. "Sorry," he said contritely, offering his hand, "we thought you were a Jew."

Shaking his head in disbelief on hearing the news, an Egyptian friend sympathised: "That's stupid, you are obviously not a Jew."

The chilling implication I was left with was that, had I been Jewish, the assault would have apparently been justified."

Posted by bataween at Saturday, September 17, 2011

Could have been worse. They could have thought he was a Jewish woman.

Its not right word as Arab are originally Semitics.

The right word is anti-Zionists

Call it anti-Jewish, then

boy, am I happy not to be in Egypt any more!!!
sultana latifa Jewish refugee from Egypt

Well, some say Arabs are Kushites. Real Arabs, of course. Not the Egyptians, Syrians, Lebanese...

Either way, we all know anti-semitism is a term used to describe an opposition or hate towards the Jews, so there's no need to fall into the Islamic/Pan Arabic trap of change the meaning of it. They do it to pretend they can't be the vicious anti-semitic scum bags they are. But why are we doing the same here?