Yemeni Jews stranded in Cairo could be sent back 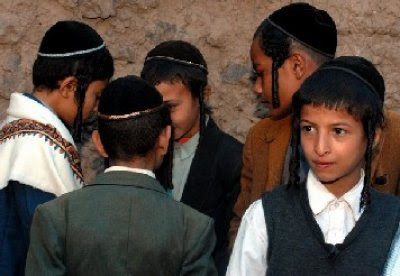 Egyptians who spot 12 orthodox Jews with ringlets wandering around Tahrir square are not hallucinating: the Yemen press reports that 12 Jews desperate to leave Yemen are stranded in Cairo and could be sent home for entering with false papers. We do not know if this was a 'freelance' initiative, or part of a botched Satmar operation to spirit the Jews to Argentina* ( 21 Jews have already got there). Either way, rabbi Yahya Yousef, in the capital Sana'a, who views Jewish flight as a betrayal of Yemeni hospitality, has condemned these Jews as outlaws.

"A dozen Yemeni Jews are stranded in Cairo of Egypt after failing to migrate to South America.

"Yahya Yousof, Rabbi of the Al-Salem Jewish minority in Yemen said that the 12 Jews that left Yemen more than two months ago are stranded in Cairo and that they had left Yemen illegally.

" The 12 Jews are now being held in Egypt. He said that the twelve Yemeni Jews are suspected of forging official documents and could face legal actions due to not having proper documents.

"A Yemeni Jew from Raidah town, 50 kilometers to the north of Sana’a, who asked to not mention his name said that many of the Yemeni Jews minority that live in Raida including the 12 stranded in Cairo have been planning to migrate to Europe in fears of being killed by Islamist radicals especially after one of them was killed by a radical Islamist militant."

According to Yeshiva World News:

"As fighting and instability continue in Yemen, Satmar activists are taking advantage of the anarchy to step up efforts to smuggle Jews out of the country. According to a Kikar Shabbat report, a number of Yemenite Jews have recently been smuggled out of the country, taken to Argentina.

"Of late, the situation for the remaining Jewish community has turned increasingly hostile, to the point of life-threatening in some cases, prompting Satmar to increase efforts to save the last remnants of the once thriving community in that country. Since the rebels began efforts to overthrow the current government, attacks against Jews have increased significantly, creating the volatile situation that exists today.

"It appears that over recent days, 21 Jews, including three widows and an infant have been successfully taken out of the country, brought to safety.


"The report adds that due to the political sensitivities surrounding such an operation, the United States would not agree to serve as a safe haven for these Jews, so Satmar decided to move them to S. America, to the local Satmar community in that country."

*later reports say the Jews were bound for London

Why can't the Egyptians now send them to Israel, where they'll be safe? They can go to Argentina once they're in Israel. (Why Argentine??)

If only life were as simple! If the (anti-Zionist) Satmar are the group responsible for this cock-up, they will be doing all they can to avoid Israel. These Yemenites have sadly come under the Satmar influence.

Argentina is the next best choice after Monsey, NY. The US government are refusing to allow any more Yemeni Jews in.

Why don't they sneak into the Israeli Embassy in Cairo? That would be the best place, until they go to Israel.

Israel is the right place, but they must be strong in their Emuna and Bitachon in serving HaShem.

Maybe it is time to loudly denounce the despicable work of this Satmar sect with the last Teimanim left in Yemen, Nitzan Gilady , an Israeli film director from Yemeni heritage made a documentary on this subject :
In Satmar custody :
Yahia Jaradi and his wife, Lauza Jaradi, were an Orthodox Jewish couple living in Yemen who were contemplating emigrating to Israel before they were approached by representatives of the Satmars, an ultra Orthodox and anti-Zionist sect based in upstate New York. The Jaradis were told that they would face difficulty and moral treachery in Israel, while employment and education were available to them within the Satmar community. The Jaradis took this advice and came to Rockland County, NY, but once they arrived, Yahia discovered the job available for him was soliciting donations from Jewish families around the country by phone, while the Satmars' schooling covered only Yiddish and the Torah. Yahia and Lauza were already having second thoughts about their decision to join the Satmars when the youngest of their five children, ten-month-old Hadiyah, died suddenly. While the Jadaris were adamant that the death was the result of a fall, local police suspected child abuse, and stripped them of custody of the rest of their children pending trial. The Satmars did not come to the couple's defense, but instead took the children, who the parents believed were being used as part of another fundraising project. Nitzan Gilady, a Israeli filmmaker of Yemen origin, disguised himself as an Orthodox Jew and made his way into the Satmar enclave in Rockland County in order to film In Satmar Custody, a documentary which looks at the Jaradi case and their ongoing conflict with the leaders of the Satmar group.

"The US government are refusing to allow any more Yemeni Jews in."

Funny. The US government has no problem allowing hundreds of thousands of Asian and African Muslims in...

I feel for the family having watched the video at how they were treated by the Satmars though I am personally weary of anything involving George Soros (Soros Documentary Fund @ 0:25).

I guess one could say that like Europe, the establishment in America would rather have 20+ millions muslims than 5-6 million Jews.

I think it is due time for Israel to consider a second "fying carpet" operation seriously. The Yemeni community in Israel should do all it can to help smuggle their brethen who want to leave instead of letting them be used as pions with this never ending ideological bickering between the various religious groups.

Israel is where they should go. It is closer to their ancestral lands. It is full of Yemeni jews. It is safer for them, and they would be considered citizens right away. What are the Israeli Yemeni Jews doing? Certainly they can bring these people back within their fold wherever they might be hidding, in Argentina, or Rockland County or Crown Heights.

Sammish , how sad is the situation, Yemeni Jews in Israel are worried about this dozen of Teimanin jailed in Cairo ,but knowing they missed or didn't want to take the boot to Israel 60 years ago , it was their choice to stay in Yemen.
Only 1 or 200 remain there nowadays ....... there is no Rambam to save them this time .

A group in Argentina is true. But it's not the Satmars who drove them. It's the families who decided themselves to take a ride to the UK were they have family.
They are waiting in Argentina until they get the British approval.

Yaqoob
That is very interesting. Do you have a source for this?

What is happening to the Jewish community now! Things sound bad in Yemen.

Do you have any updates on this?

Hi Elder
The trail seems to have gone cold. As you can see, yaqoob above says the story is fabricated, but has not supplied further details.