Why did Jews leave Algeria? 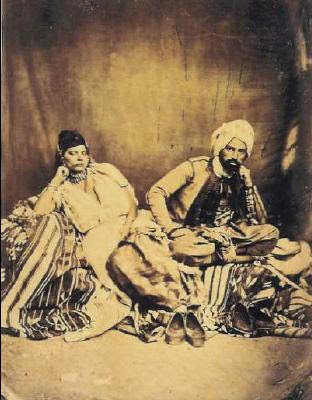 Next year, Algeria will be marking its 50th year since independence. On the Zlabia discussion forum on Jews of Algeria, the commenters have been discussing what made 160,000 Jews leave Algeria en masse in 1962. The country has almost no Jews left.

"Why did we leave Algeria? Simply because life was unbearable. Our Arab neighbours were harrassing our daughters, in the cinema or in the street, at the Barbes metro station. Is it a crime to wear a Star of David? No Jew would have thought of leaving his homeland if they had left him in peace.

"Before the Algerian troubles, I would go and buy bread for the sabbath at a bakery next door to an Islamic religious school. The little Muslims would run after us shouting Ihudi shahedd (death to the Jews). Before they set out for school mothers would warn their children against traffic accidents - and Arabs.

"Today's Algeria is not ready to 'take back' its Jews."

"Are you sure it was not because you were expelled? Jews were in Algeria for milennia and you talk as if you were colonialists and pieds-noirs when you were practically the indigenous people of Algeria after the Berbers. The Jewish presence does not go back to 1830 (when Algeria became a French colony - ed) - far from it. During the milennia that they lived in Algeria do you think they waited until 1962 and left of their own free will. Stop rewriting history through 'pride' - the Jews were expelled against their will, that's all."

My comment: OUARGLA did not exactly say the Jews left of their own free will, but harrassment was a contributory factor in their exodus. The Jews were indeed expelled, but as they all held French citizenship as a result of the Decret Cremieux - a status forced upon them in 1871 - they became identified with the pieds-noirs ( descendants of French colonials in Algeria).

o/t
new draft Libyan constitution does not assert that Libya is an Arab state. But it is still a Muslim state respecting Shari`ah

Though the Jews left Algeria of their own free will after being harrassed and threatened, the end result will be for Algera to go downhill economically until it reaches the level of the lower Arab states. No western investers with any sense is going to invest in a society that doesn't embrace individual freedom of religion. Arabs don't seem to understand this.

Jews of Algeria were on average better educated and urbanites and more progressive than their conterparts of Morocco who were for the most part rural farmers, , artisans,and small shopkeepers of deep interior of Morocco. Jews of Algeria benefited tremendoulsy from the French colonial policies and republican ideals, because French thought of Algeria as French territory and were there from 1830 to 1962, while Morocco was seen by the French only as a protectorate with few economic vital points to keep the British, and the Spanish colonial aspirations in check.

Neither Algerian nor Moroccan Jwery left on their own free will. To say otherwise is to distort history. They are however nuanced differences as to whom would have lost so much from the "indirect" forced exodus and suffered tremendous economic loss. Of course, Algerian Jews had more to lose and because of their social and economic and education attainement were more threatened by the Marxist-Lennist political party of the FNL (Front de Liberation National) which saw them as the fifth column and zionist neo-colonialist as their former French masters. They left not of their own free will but under the threat of gun and butcher knives. The slogan of the FNL towards the Jews was simple and was promulgated everywhere during the early days of independance and it was chilling and straight in your face death warrant, and it was: "La valise ou le cerceuil" translated as "the briefcase or the coffin". That's was the slogan.

I think that it is sad to see that the old generation of Algerian jews were not really forthcoming about telling their grandchildren about the desastrous exit from Algeria. I know it was not like the Iraqy Farhood, but still, many generations that worked so hard to better the lives of ordinary Jews saw all their accomplishments sink to the bottom of the sea and with the countless land disposition, businesses lost and usurped by the greedy arab vultures.

I think the Algerian Jews feel a double mis-understanding. On one hand they were not regraded as equal to the French Algerian citizens despite their elevated assimilitated status and they were religiously despised by the Arab Muslims for being jews.

One thing that has emerged after all this about the Algerian Jews and its relations with Israel, is that the Algerians Jews were heavily critizised and at time demonized for failling to immigrate to Israel to help built the newly established state. Instead the majority of the educated elites immigrated en mass to France and Canada. A very few percentage made it to Israel in 1962. And this is still is a point of many ill feelings that the Moroccan Jews feel towards the Algerian Jews.

the algerian muslims hated the jews of algeria for many reasons like helping the french soldiers killing the algerian civilians during 130 years of colonization by working as spies but we algerians paid a very price for independece, algerian jews should be fight with us agianst the french invaders rather they joined them along side the harkis which made the muslims in algeria hate these two groups (harki and jews).

Not true. The Jews never joined the harkis but tried to maintain their neutrality. They were forced eventually to choose the French side after the murder of Raymond Leyris and the ransacking of the Great synagogue of Algiers.

the jews of algeria were never neutral they allied with the french from the begining, even before the assassination of shiekh raymond you can go and read why french seccusfully occupied Siege of Constantine in 1837 and who helped them in occupying it and also the attack on oran (with the help of algerian jews) so basically the jews of algeria helped the french during there invasion on algeria in 1830s (not all but the majority),
i am not against the jews of algeria becuase there are algerians like any other ethnic groups in algeria, but it is sad to see your own people (jews) fight against you during an foreign invasion on your country.

Hi.¨
I am from the north of Algeria(city)alger .a true Numidian in blood.if you know what Numidia mean then you know eveything and will understand that there is nothing left there.I can see that they are teaching you arabic.Gangratulation.are they arabic? to bad because the original oldest language is amizighia or beberia then there is french ,local algerian language. but after defeats those who stol arabised and islamized our land decided that eveythone(even it is not our identity) must learn arabic obligatory and be muslim if he or she don t want to die. Bachar is a small desert village located in south with verry warm weather verry...have you took some drogs to end up there ?that kind of community they are not civilsed like in alger and they are african/arabic mix.It could be a little hard for you to live there.Well.. one thing is sure me i can not survive in the south impossible. they have other mentality , other traditions , food, clothes , language . algeria was before the refugies land. there are people from different origins spain , french,italien,asiatique,jewish,russian,polish.... ,and the famous arabic/turkish who colonized and stol our Numidia land and islamized eveything even the trees. misiria . the local algerian language is a mix of all thoses origins that build the history and language.the goverenment refused to recognize that the local algerian langue is actually a language because all citizens use t to communicat

if you know what Numidia mean then you have understood everything and that algeria is not the original name but a symbol of the arabic/turkish muslim who abused ánd stol our women , land , ressources . colonisateurs . usually the muslim says that it s the french who were colonisateurs but no . they juste did some cleaning of the orient shit but it was not enough because after the developped laws to stop O2 and welcome onely populations from orient an not from europe . to send us much as possible arabic muslim populations from orient to europe as a refugies is one of their best success to delete what the call ennemies of God "all non muslim" . so that what already happend in algeria .
this technic is call sleepy warm tools ? hamanitary europeen spirit , red cross , humanitary organisations ..etc . goal? realise what their koran ask : islamisation of all the world all populations egro arabisation . of course to can read the fucking koran you need arabic language