Recent events in Libya and the imminent demise of colonel Gaddafi's regime have awakened a sense of his Libyan roots in the British MP Robert Halfon. He writes in the Daily Mail:

I wish my grandfather, Renato Halfon, was alive now to see the demise of Muammar Gaddafi. In 1968, after some anti-Jewish pogroms, he had been forced to leave Libya and, as an Italian Jew, went to Rome.

He had planned to return to Tripoli once the pogroms had subsided, but Gaddafi took power in 1969 and all Jewish businesses were seized by the new regime. He didn't have a house or business to return to. On top of oil money, Gaddafi had bought loyalty by giving his supporters all the property taken from the Jews and Italians.

I don't think Renato ever could have imagined that he would have a son, Clement, who would marry an English woman or a British grandson who would become an MP. 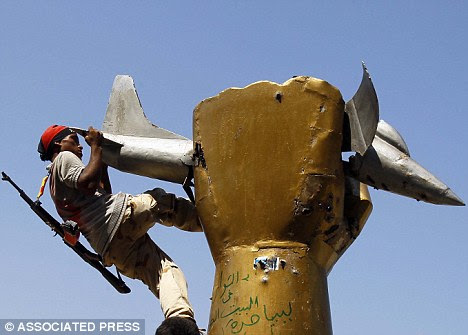 Liberty... dropped from the sky: A rebel fighter climbs on top of a statue inside Muammar Gaddafi's Bab al-Aziziya compound in Tripoli earlier this week.

I love Britain, was born here and would never live anywhere else. But I feel that I am also a deep concoction of Jewish and Italian from Libya. I have always wanted to visit Tripoli, but very few Jews were allowed to go when Gaddafi ruled and those who had spent any time in Israel were banned. It is strange, but recent events have awakened a sense of my Libyan roots within me. It has been good to have conversations with my father and his friends from Libya, to try to understand what it was like to live there in those difficult times.

My grandfather, who had a clothing business, had seen Gaddafi coming. Because pogroms were becoming a regular occurrence, he sent my father to England in the late Fifties when he was just 15. Grandfather loved Great Britain. During the end of the Second World War, as the British arrived in Tripoli, he had sold clothes to the British Army. He would say: 'They were the only ones who paid on time.'

It is worth remembering that King Idris was installed as monarch of Libya in 1951 by the British in the aftermath of the war when it gained independence from Italy and the old colonial name of Tripolitani disappeared. After a short stint in Rome, Renato joined my father in England, where he was to spend the rest of his life, in North London. 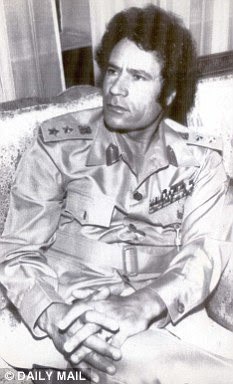 Charismatic: Colonel Muammar Gaddafi as a young man, shortly after seizing control of Libya in a military coup
But, although my grandfather had contempt for Gaddafi, the Colonel hadn't always been a monster. My father remembers him rapidly becoming a popular figure.
Before the military coup, Gaddafi used to walk down the famous Italian street in Tripoli, Corso Vittorio Emanuele (now known as Jadat Istiklal), shaking hands with passers-by (including my dad), wearing a broad, serene smile and speaking loudly.

Gaddafi was articulate. He nurtured dreams of Pan-Arabism. Because of the weakness, albeit benign, of King Idris, Gaddafi became known as 'the Liberator'. It was even thought he might be sympathetic to Western interests. So much so, that the Americans who controlled the large Wheelus air base, just outside Tripoli, did nothing to stop the coup d'etat against the King.

No one imagined that Gaddafi would impose a totalitarian regime and hold power for 42 years. But now he has gone and everyone is asking: 'What next . . . will it be a repeat of Iraq in the aftermath of the overthrow of Saddam Hussein?'
Read article in full

Email ThisBlogThis!Share to TwitterShare to FacebookShare to Pinterest
Labels: Jews of Libya, Testimonies