More evidence that the Jews are indigenous 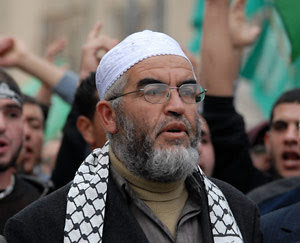 The Palestinians have done it again. While gearing up for UN recognition of a Palestinian Arab state in September, they have rebuffed all efforts to restart peace talks by telling the world they will never recognise Israel as a Jewish state.

Combined with a persistent campaign to deny or erase Jewish history, this refusal to recognise Israel as a Jewish state is based on the fabrication that the Jews are colonialists and usurpers who do not belong in Israel. The issue is not the Israeli occupation of the West Bank - an Israel the size of a tablecloth in Tel Aviv would be equally illegitimate. The Palestinians are the indigenous people, they claim. They have been there since 'time immemorial'.

This blog has repeatedly tried to explode the myth of Jewish colonialism. Jews lived continuously in the Middle East and North Africa since Biblical times. More than half of Israel's Jewish population are refugees from Arab and Muslim antisemitism. In many cases their antecedents are indigenous to the region. The oldest Jewish diaspora - the Babylonian - dates back 2,600 years. In spite of the Roman conquest of Judea, Jews continued to live in Palestine, their numbers limited only by lawlessness and intimidation.

This brings me neatly to Rivka Shpak Lissac, who has been dilligently charting the origins of the Arab population in Israel. Scholars concur that there was an upsurge of Arab immigration in the 1930s. Few Arabs can trace their ancestry in Palestine beyond 150 years and in almost all cases, Jews preceded them in their villages.

Take for example, Umm al Fahem (population 43,300), which for some reason found itself on the Israeli side of the border after 1948. It is the hometown of Sheikh Raed Salah, the leader of the Northern Islamic movement in Israel. Salah has been among the most outspoken in his denial of Israel's Jewish roots. But where did his own ancestors come from? Under her entry on the origins of the population of Umm al-Fahem, Lissac writes:

One theory is that Arabs first settled in Umm El Fahem in 1832-1840, at the time Ibrahim Pasha (son of Muhammad Ali, the ruler of Egypt). He took the land from the Ottomans and brought settlers from Egypt in order to strengthen his hold of the Land of Israel (Mappa Encyclopaedia, vol. 1, p. 39). Dr. Shlomo Arye Ben Elkannah surveyed more than 800 Arabic villages in the Land of Israel west of the Jordan River in 1943-1947. He concluded that many of Umm El Fahem’s settlers were first generation migrants: in 1943 there were 1,400 residents of Egyptian origin, about 900 from the Arab Peninsula, and about 500 from the Trans-Jordan. Altogether there were 2,800 people living in Umm El Fahem in 1943.

Sheikh Salah belongs to the Mahajda clan of about 20 families. This clan originated in the Mahajan village in the Horan, Syria. The clan moved to Umm El Fahem about 300 years ago, at the end of the 17th century. They have not been in Palestine since 'time immemorial.'

Dr Lissac's website is a treasure trove concerning the origins of Arab settlements in the Galilee and elsewhere: I strongly urge you to visit it.

the website is good but do you really think groups like the Palestine Solidarity Campaign,MPAC, Students for Justice and Peace in Palestine or the ISM are going to visit the website. They are so indoctrinated in their beliefs about Jews being colonists or "Khazars" they will completely dismiss the site

Please for Christ sake help this poor boy from Haiti.