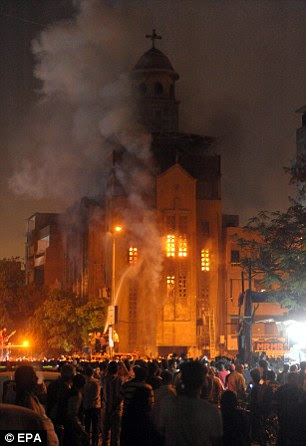 Islamist terrorism against Christians in the Middle East and North Africa does not seem to prevent Middle East Christians from dredging up traditional blood libels and conspiracy theories blaming Jews and Zionism. In a bold Jerusalem Post article also posted at Harry's Place (read the highly-informed comments thread while it is still there) Aymenn Jawad al-Tamimi says that the root of the problem lies in entrenched 'theological' antisemitism, which still views Jews as Christ-killers:

Two months after the atrocity, for example, the Melkite Greek Patriarch Gregory III Laham characterized the terrorist attacks on Iraq’s Christians as part of “a Zionist conspiracy against Islam.”

He further affirmed, “All this behavior has nothing to do with Islam… but it is actually a conspiracy planned by Zionism…

and it aims at undermining and giving a bad image of Islam.”

He then said the massacre “is also a conspiracy against Arabs and the predominantly Muslim Arab world that aims at depicting Arabs and Muslims in Arab countries as terrorist and fundamentalist murderers in order to deny them their rights, and especially those of the Palestinians.”

While the patriarch has warned of the dangers of Christian emigration and the formation of a “society uniquely Muslim,” he attributed the risk of “demographic extinction” solely to the Israeli-Palestinian conflict.

Similarly, in an interview with NBN TV on November 9, 2010, Iraqi priest Father Suheil Qasha claimed that the Jews consider all gentiles to be beasts, and asserted that the “real danger” to Middle Eastern Christians came from Zionism. He went on to state that those who perpetrated the attack on the church in Baghdad were certainly not Muslims, but probably those trained and supervised “by global Zionism.”

Anti-Semitism extends to the Coptic Orthodox Church, which, serving around 10 percent of Egypt’s population, is the largest single church in the Middle East and North Africa. As liberal Egyptian blogger Samuel Tadros points out, a certain Father Marcos Aziz Khalil wrote in the newspaper Nahdet Masr: “The Jews saw that the Church is their No. 1 enemy, and that without [the] priesthood the Church loses its most important component . Thus the Masonic movement was the secret Zionist hand to create revolution against the clergy.”

At this point, many would no doubt be inclined to explain away this anti-Semitism by pointing to the anti- Jewish sentiments that are mainstream among the Muslim populations of the region. Living in such an environment – the reasoning goes – Christians would naturally be careful not to denounce deeply held convictions among their Muslim neighbors for fear of provoking persecution.

However, the cancer of hostility toward Jews among Middle Eastern Christians goes much deeper than that.

Indeed, it is telling that other non-Muslim minorities that have suffered discrimination and violence at the hands of Islamists – including the Yezidis, Mandeans and Bahá’ís have never blamed Jews or Zionism for their persecution; their religions have not featured anti-Semitic doctrines.

The case of the Bahá’í community is especially important because, with the religion’s global center located in Haifa, charges of collaboration with Israel can easily be leveled against Bahá’ís. Yet the Universal House of Justice has never complained of a Jewish/Zionist conspiracy against the Bahá’í communities in Iran and the wider region. Rather, it has always rightly identified the problem as enforcement of traditional Islamic law on the treatment of non-Muslims and apostasy, along with the supremacist attitudes fostered by the promotion of Shari’a.

Ultimately the malaise of anti-Semitism among Middle Eastern Christians is entrenched in charges of deicide (i.e., of killing Jesus) against the Jewish people as a whole. As Saliba put it, Jewish conspiracies are “only natural” because the Jews repaid Christ for his miracles by crucifying him. In particular, Pope Shenouda III of the Coptic Orthodox Church lambasted the Western churches for exonerating Jews for Christ’s death, in a televised interview on April 8, 2007. He argued that Jews were “Christ-killers” because “the New Testament says they are.”

It is clear that in general, the Eastern churches have yet to move beyond the noxious anti-Semitic motifs repudiated by the Vatican in its Nostra Aetate declaration issued in 1965, after the Second Vatican Council. If anti-Semitism in the Middle East and North Africa is to be eradicated, the burden of theological reform will evidently not be a task for Muslims alone.

My comment: repressed minorities in the Middle East should be natural allies, but the author is right that some Christian sects are hampered by the baggage of traditional antisemitism - much of it theological. Seeking to deflect Muslim attention on to the Jews is not a new tactic, and it is indisputable that Christian antisemitism in the Middle East infected relations between Jews and Muslims over the centuries - look no further than the 1840 Damascus blood libel. This is not to minimise traditional Koranic antisemitism. Theological reform is not a task for Christians alone.

As for the author's assertion that non-Christian minorities are less antisemitic than Christian, this is debatable. The voices of Yazidis and Mandaeans are simply not heard. I have heard antisemitic remarks made by a Mandaean, yet I have also heard expressions of great sympathy - likewise with Copts and Maronites. Baha'is are undoubtedly positive towards Judaism and Israel'- most probably because their shrine is in Haifa - but Ahmadis, a breakaway sect of Islam (2,000 of whom live in Haifa) are more lukewarm.

Arab Christian: Middle East Christians are no friends to the Jews (Israel Today)

Dhimmi fear and confusion rule, except in Israel

Why can't Mid East Christians be allies of the Jews?
Posted by bataween at Thursday, August 04, 2011

All my life I have had to fight against the unfair accusation that we killed Christ. My kids too have had to hear that they were dirty Jews.
When we arrived as refugees in Italy, going hungry and penniless I was told by a young man: You deserve every you get because "avete ucciso il Cristo";you killed Christ!
What chances are there for this to end? None because they still teach it in their catechism
Fortunately the government has passed laws against this type of accusation and even if everything is not perfect here, at least no one can insult or threaten us without consequences.
Anything that does not kill you makes yoou stronger
Sultana Latifa

Basing my personal experience in Italy as well I find difficult to say that Christian anti semitism is going to be estingushed and radical islam is the only threath we have to face today - as sometimes I can find in mostly USA right wing blogs.
Catholic church has reviewed most of its position toward Jews, I can concede, and some catholiscs are genuine pro - jews supporter. Nevertheless we are very far from saying that a JudeoChristian omogene civilty exists and stays against Islam.
"avete ucciso Gesù e siete peggio degli islamici " could be even heard to day - ( and Italy is not considered an high level antisemitic country - au contraire )

Countries where Catholics are the majority of the population are always hard to live in.
I'm in my 20's - I live in Brazil - and I ocasionally hear those kind of things (by the way, Rambam agrees with the accusations that we are to blame for the death of the "Nazarene").

Once my father told me that the most degrading thing (and he's an Egyptian Jew...) he has ever heard was actually a compliment. Something like "this is the most Catholic Jew I've ever met". He heard it from a friend talking in public about how generous and good he is...

The western Catholics have signed Vatican 2, a document absolving the Jews of killing Jesus - but the eastern Catholics and other Christians never did. Au contraire, the leadership of the eastern Chrstians seems to be getting more antisemitic by the day!

Unfortunately, most of the third world Catholics don't even know what that means.