Israel's links with Libya could warm up - or not 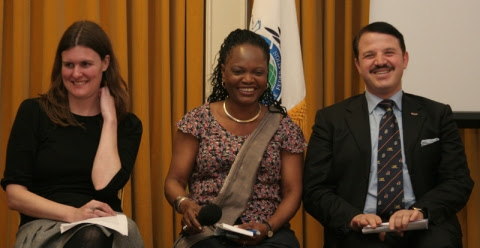 Ahmed Shebani at a conference in 2010

Don't you love the press? Two Israeli news media come up with conflicting accounts on the prospects for Israel-Libyan relations after interviewing the same Libyan opposition spokeman.

Israel Today magazine quotes Ahmed Shabani as saying that relations between post-Gaddafi Libya and Israel could be warm:

A prominent Libyan official associated with the opposition forces now taking over the North African nation hinted this week that relations between post-Gaddafi Libya and Israel could be warm.

Ahmad Shabani, son of an advisor to Libya's former king, has in recent weeks acted as a spokesman for Libyan opposition forces in numerous mainstream media interviews.

While it is still unclear how much influence Shabani will wield when the regime of dictator Muammar Gaddafi is fully overthrown, it appears he does have a certain degree of clout.

In an interview with Israeli newspaper Ha'aretz, Shabani suggested he and others like him will use their influence to foster warm relations with Israel, and already see the Jewish state as a potential ally in their quest for freedom.

"We are asking Israel to use its influence in the international community to end the tyrannical regime of Gadhafi and his family," Shabani told Ha'aretz.

The newspaper asked Shabani if, once the dust settles, his nation will officially recognize Israel.

"That is a very sensitive question," Shabani responded. "The question is whether Israel will recognize us."

Israel has already ingratiated itself to a certain degree with the Libyan rebels.

Haaretz manages to reach the opposite conclusion after an interview with Shabani:

The chances that Israel will establish even low-level relations with a new regime that takes shape in Tripoli are not great. This assessment is based on a Haaretz interview this week with Ahmad Shabani, a Libyan opposition leader. Since the rebel government formed about six months ago in Benghazi, envoys have been trying to figure out if there are hopes of establishing a diplomatic relationship with Israel. Jewish businessmen, most of them of Libyan origin, have been particularly active in these efforts; they have told Israel's Foreign Ministry and other government agencies that they have personal relations with figures in the Benghazi interim government and have offered help in cultivating ties.

Email ThisBlogThis!Share to TwitterShare to FacebookShare to Pinterest
Labels: Israel/Libya

I am a Libyan and can tell you with certaintiy that the chances of that are NIL...