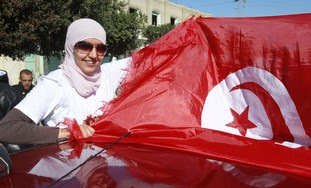 According to this report in the Jerusalem Post, the new Tunisian constitution will not only enshrine Islam as the country’s state religion, it will explicitly ban ties with the state of Israel. Jonathan Tobin, blogging at Commentary, is not surprised:

Tunisia has a history of secularism and devotion to education and modernization. It is no surprise that the new government would cater to public opinion by making Islam the state religion. But the move to ban any chance of reconciliation with Israel and to make support for the Palestinians part of Tunisia’s new charter is something else. Under the old regime, the small but still vibrant Jewish community was protected and tourism from world Jewry was encouraged. But Islamists are more of a force in Tunisia than before simply because they are no longer the objects of repression as they were under the now deposed authoritarian rulers of the country.

While there appears to be no immediate danger of Tunisia abandoning its secular ways and following a more Islamist path even in a democratic context such as has happened in Turkey, the debate over the new constitution is troubling. If there was any country in the Arab world where Jews were made to feel welcome both as citizens and visitors, it was Tunisia. But if the new Tunisia proves more hospitable to Islamist extremism and opposed to peace with the Jewish state under any circumstances, then it will be one more reason to believe the Arab Spring has turned out far worse than its Western supporters hoped.

Remember they started it as hunger revolt .....

This proposal also makes it clear that the issue is not the status of Judea and Samaria: for the Islamists, it is the very existence of Israel that is the problem.