Gaddafi sends a delegation to Israel 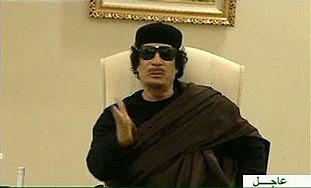 Both government and rebels in Libya are trying to curry favour with the West - by visiting Israel. The Jerusalem Post reports:

A delegation from Libya sent by leader Muammar Gaddafi recently visited Israel and met with opposition leader Tzipi Livni and other officials, Channel 2 reported on Sunday.

According to the report, the delegation of four senior Libyan officials received visas from the Israeli embassy in Paris after gaining approval from Israeli security services. Once in Israel, the delegation immediately asked to meet with Livni.

Upon receiving the invitation for a meeting, Livni immediately turned to security officials, who gave their approval for the opposition leader to meet with the Gaddafi delegation.

According to the report, Gaddafi's motive in sending the officials was to attempt changing Israeli perceptions of the embattled Libyan leader, and to try and prevent Israel from supporting Libyan rebels, who have been fighting government forces for months.

As part of that effort, the Libyans reportedly gave Livni "digital media," which she handed over to security officials.

In the four-day visit, the senior Libyan officials reportedly met with other Israeli officials in addition to the opposition leader.

Were they really sent by Gaddafi? Were they opposition reps posing as Qaddafi's envoys to set him up?
On the other hand, Qaddafi could possibly try to get back at those who let him down by spilling the beans on them. Bring a few former friends down with him.

It's like showing you're trying to get along with Israel without actually having to.

A few more details about these contacts should be highlighted. According to Yisrael HaYom 11 VII 2011, "... the Libyans tried to offer a deal by which Israel would undertake to stop the [NATO] attacks [on Libya] and in return Libya would return the Jewish property that had remained there when the Jews had made `aliyah to Israel."

This sounds like Qaddafi is somewhat desperate. And the whole notion is bizarre. Israel cannot stop the NATO attacks all by itself. Meanwhile, who could trust Libya or Qaddafi in particular to actually return Jewish property in any case?