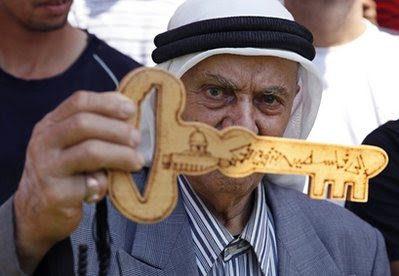 Two things stand out from the comments following Ghassan Karam's article in Ya Libnan, (via Elder of Ziyon blog) advocating full citizens' rights for Palestinians in Lebanon: one is that Lebanese resentment of their Palestinian brethren runs deep. The second is that Karam cannot quite bring himself to call on Palestinians in Lebanon to abandon their 'right of return' to Israel.

Karam's reply to Aparatchik does, however, show that he is willing to concede that Jewish refugees from Arab countries do have claims, and that both sides are entitled to file claims against each other.

aparatchik:
Are you saying the Palestinian Arabs deserve an "honorable settlement" vis a vis Israel? The Arab militias chose to attack the Jewish community. They gambled and lost. It may be argued that the Palestinian Arab civilians were not to blame for the invasion of the other Arab armies and the subsequent extension of the war but in that case their claim is with those governments. German refugees from Poland, Czechoslovakia after WWII have no rights vis a vis those countries and the responsibility lay quite rightly with Germany as the belligerent to settle them within the new German borders. The arab regimes gained a lot of land (4x size of Israel) and other assets from their Jewish refugees and - if they lack the honour to return them to their rightful owners - should at least use these resources for the benefit of the Palestinian refugees and their descendants, people they have so cruelly manipulated for so many years.
Ghassan Karam:

It is sad that the only two sounding-Israeli commentators have used this post that is attempting to deal with a purely domestic issue to make all sorts of claims that are not the subject of this post. Nonetheless the issue of Jews that were driven out of the Arab countries is a legitimate one and probably can be used to counter some of the claims by Palestinians. I am glad that you think that both sides are entitled to file counter claims.
Posted by bataween at Thursday, June 09, 2011

Citizens of Poland, Russia and France that are of German decent have EVERY right to return to their nation if they were kicked out because Germany attacked them. Zionists, the first recognised terrorists, forced native arab civilians out LONG before neighbouring states went to war to reclaim borders and land stolen by the nation of Israel. No amount of bitching changes the fact that Palestinians have a right of return under International Law. In 80 years or so when the original arabs Israel stole the land off finally die, THAT DOESN'T CHANGE. Their decendents still have that right. Because they have been fighting for their right since day one.

Show me where in international law third generation Arabs have the right to 'return' to a country they have never seen. Iraqi Jews, Libyan Jews and Egyptian Jews who were born in those countries don't have that right!
It is obvious that the only reason you are interested in the 'right of return' is as a political weapon to use against Israel. You don't care about the fact these Arabs are deprived of citizenship, etc in their countries of birth.