What about JNF land in 'Arab' areas? 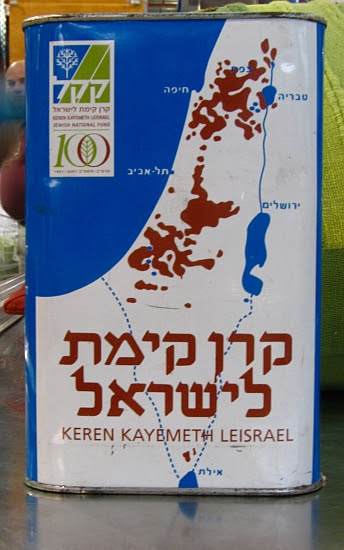 Although some British community leaders deny it, David Cameron's resignation as Jewish National Fund honorary patron is the result of an insiduous Palestinian campaign of delegitimisation. But is the JNF, once a pillar of the Israeli establishment, doing enough to put its case? It's time to turn the tables and talk about the JNF land seized and squatted on by Arabs, says Michelle Huberman in her Jerusalem Post blog, Clash of Cultures:

Whilst the pro-Palestinian campaigners celebrate David Cameron stepping down as Honorary Patron of the JNF, our Jewish leaders here in the UK (thankfully with the exception of Harvey Rose of the ZF) seem to be excusing his actions rather than condemning them. Leading the choir is Mick Davis, the controversial UJIA chairman who asserts: "Whatever the reasons David Cameron may have for stepping down as patron of the JNF, I have no doubt he has not responded to pressure from anti-Israel groups and there is no basis for this assertion."

Has Mick Davies not seen the StoptheJNF campaign? This movement has been working relentlessly to delegitimise the JNF. They have a very polished operation and no doubt see Cameron’s actions as a victory for their struggle.

David Cameron is a great orator, and he gave a marvelous speech defending the Jewish community at a recent CST dinner, however before leaders sing his praise they should not forget that our British leader plays to his audience. It was not so long ago when he was in Turkey with Prime Minister Recep Tayyip Erdogan that he was describing Gaza as prison camp and that the Israeli defensive attack on the Gaza flotilla was completely unacceptable.

The Jewish community in London expect the leaders of the main Jewish charities to speak out in defense of the JNF. This charity is embedded in our hearts, and we have memories of putting our spare change in blue boxes in our parents' and grandparents' homes and saving up to buy trees in Israel.

As Samuel Hayek, the chairman of JNF UK stated: “The lack of vocal support for Israel on this issue from leaders of Anglo-Jewry has been deafening.” Earlier in the year he took the brave decision to withdraw the JNF from the Jewish Leadership council, an unelected body that has now “shifted significantly” towards foreign affairs and the actions of the Israeli government.

But are the JNF putting their case over well enough? How many people know that the JNF lays claim to 73,974 dunams in southern Syria (Jewish Property Claims against Arab Countries, by Michael Fischbach p36)? The earliest purchase was made in the 1880s when it was under Ottoman rule. Surely they should have been demanding compensation from the Syrian government? Maybe if this had come to public attention, it could have been negotiated for the Palestinian refugees that the Syrian government have allowed to fester and more recently mobilised to storm Israel's borders.

The same in Lebanon: 4,000 dunams. Originally purchased by the Palestine Israel Colonisation Association (PICA) and later transferred to the JNF. This could also have been negotiated.

Where is the outcry when Arabs build illegally on JNF-owned land? There is an extremely tangled web of Jewish ownership in Arab areas. There are hundreds of thousands of Arab squatters in 'Arab east Jerusalem' who live on land still owned by the Jewish National Fund. The JNF purchased hundreds of individual parcels of land in and around Jerusalem during the 1920s, 1930s and 1940s. Some ended up under Jordanian control. In 1948, on one of these parcels the UN built the Kalandia refugee camp, seizing the land without permission from the owners, the JNF.

As Gil Zohar explained in his 2007 Jerusalem Post piece other parcels of land in 'Arab' east Jerusalem were cut off from their Iraqi and Iranian Jewish owners after they came under Jordanian rule. In total 145,976 dunams of Jewish land is said to have come under Jordanian control. (Jewish property claims against Arab countries by Michael Fischbach, p 85).

Another 16,684.421 dunams of Jewish land in the rural West Bank - including the Gush Etzion settlements, land between Nablus, Jenin and Tulkarm, and in Bethlehem and Hebron - were seized by the Jordanians after 1948.

The Palestinians lament that JNF trees have been planted on the site of 400 villages, but Jews have been evicted from every city in the Arab world, their synagogues abandoned, their cemeteries bulldozed and their property seized – amounting to losses 50 percent greater than Palestinian. These Jews were loyal citizens and non-combatants, hundreds of miles away from the war in Palestine.

Now that Bibi has finally spoken about the Jewish refugees from Arab lands, maybe he will start to talk about the actual losses in monetary terms?

It should also be noted that the JNF are currently raising money in order to develop Bedouin communities in the Negev.