The lost and found world of the Cairo Geniza

Much of what we know of life for Cairo's Jews in the 12th century - and it was not especially good - comes from the Geniza, the store of discarded documents discovered in the attic of the Ben Ezra synagogue. But what was trash in medieval times is priceless to modern historians, says Anthony Julius in The New York Times, reviewing the new book, Sacred Trash (with thanks: Silke):

About 120 years ago, a cache of manuscripts, mostly fragments, was discovered in the storeroom of an old Cairo synagogue. Its members had deposited them there over many centuries. This collection of documents managed to be both heterogeneous and comprehensive at the same time. 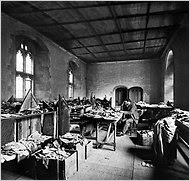 Adina Hoffman is the author of “House of Windows: Portraits From a Jerusalem Neighborhood.” Peter Cole is a poet and translator. As they relate in their engaging book “Sacred Trash,” the materials in the storeroom included letters, wills, bills of lading, prayers, marriage contracts and writs of divorce, Bibles, money orders, court depositions, business inventories, leases, magic charms and receipts. One early examiner of the cache described the scene as a “battlefield of books.” The most recent deposits were made in the 19th century; there were fragments that dated back to the 10th century. Another early visitor described the scene thus: “For centuries, whitewash has tumbled” upon the documents “from the walls and ceiling; the sand of the desert has lodged in their folds and wrinkles; water from some unknown source has drenched them; they have squeezed and hurt each other.”

The challenge presented to researchers, to reconstruct documents out of fragments, remains akin to the challenge embraced by jigsaw enthusiasts, save that in the case of the Cairo cache, there were very many pieces, from very many puzzles, all mixed up together, in one great mess.

Read article in full
Posted by bataween at Sunday, June 05, 2011