The lessons of the Farhud for the Middle East today 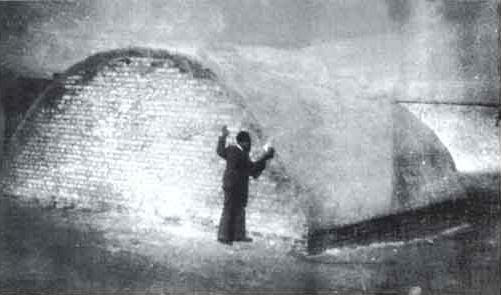 Mass grave for the Farhud victims

What lessons does the Farhud pogrom against the Jews of Baghdad hold for understanding the Middle East of today? Alex Joffe writing in Pajamas Media examines the influence of Nazism on the Arabs and concludes that such events as the Farhud were sparked by a lethal cocktail of religion and fascism:

Seventy years ago during the Jewish holiday of Shavuot, June 1st and 2nd, 1941, Iraqis rampaged through the Jewish sections of Baghdad, killing between 100 and 600 individuals, injuring countless more, and looting whatever they could. This was the turning point in the history of Iraqi Jews, who had resided in Mesopotamia for over 2,500 years. In the decade that followed, the community was systematically disenfranchised, robbed, and largely expelled. What lessons does this hold for understanding the Middle East of today?

The pogrom known as the Farhud (“violent dispossession”) was conducted by Iraqis. On the first day the perpetrators were soldiers, policemen, and Baghdadis, and on the second, Bedouin from outside the city eager to claim their toll of Jews and share of loot. But the Farhud also came at the point at which the Nazi-inspired and supported coup against the pro-British Iraqi monarchy was destroyed. Like the Holocaust, it is an opportunity to examine the nature of hatred in past and present.

The question of the Nazi relationship with the Muslim and Arab worlds is far from new. Indeed, even before World War II, British and Zionist officials took note of the relationship between the “grand mufti of Jerusalem,” Haj Amin al-Husseini, and the Nazis. Long a thorn in the side of both, the mufti had been foolishly appointed by the British as the chief Muslim religious official in Jerusalem. In return, he schemed against them, the Jews, and Arab rivals from Palestine to Iraq, fomenting hatred and terrorism. Central to his ideology, and personality, was rabid hatred of Jews. Within days of Hitler’s ascent to power the mufti reached out to Nazi officials. His later record of Nazi collaboration is exceptional: conspiring against the British in Iraq after his flight from Palestine; broadcasting to the Arab world from Berlin; and raising Muslim SS divisions in the Balkans. Only by escaping to Egypt after the war with French help did he avoid a war crimes trial.

But how much were he and his minions actually inspired by Nazism? And, to the extent that he was the central Muslim figure railing against Jews and Zionism before and after World War II, how much was Palestinian and Arab opposition ‘”Nazi-inspired” or even a local manifestation of Nazism? Did this contribute to today’s “Islamo-fascism”?

Direct Nazi support for the mufti and for local fascists in Egypt, Syria, Iraq, and Iran was late, but when war came it was deep and pervasive. Money and arms flowed, and German forces entered Iraq from Vichy Syria in May 1941 to support the Sunni military officers who had launched the coup, with the encouragement of the German ambassador, Fritz Grobba. Incitement against the Jews of Iraq had been heightened by years of classroom propaganda by Palestinian Arab and Syrian teachers facilitated by the Minister of Education and Nazi enthusiast Sami Shawkat, propaganda broadcasts from Germany, and by semi-military fascist societies.

In return, there was extensive Muslim support for the Nazis, as subversives in the Middle East, SS troops in the Balkans, and through the mufti’s direct support for the Holocaust. It was he who went relentlessly from office to office urging Nazi officials not to barter Jews, including children, in exchange for goods but to send them to their deaths in Poland.

But do historical data show a widespread grassroots Arab desire to exterminate Middle Eastern Jews? This is impossible to quantify. On the one hand, as Robert Satloff documents in his book Among the Righteous: Lost Stories from the Holocaust’s Long Reach into Arab Lands, there were many cases of North African Muslims sheltering Jewish neighbors from the Nazis. But on the other, far more soaked up Nazi propaganda broadcasts, Islamified by the mufti and others.

Many real and potential collaborators were spread throughout Arab countries. Most ominously, the Nazi Einsatzgruppe that would have followed Rommel into Egypt in 1942 planned to have local Arabs do most of the dirty work. Local collaborators in Europe had demonstrated an enthusiasm for slaughtering Jews that sometimes even shocked the Nazis, and there is every reason to think that this would have been the case in the Middle East. Indeed, the sheer bestiality of the Farhud (like the Hebron massacre of 1929), replete with senseless mutilation, shows that deep-seated hatreds were being played out, not simply to kill but to degrade Jews in the act of killing and in death itself. This can only be attributed to religion.

Numerous Nazis found shelter in the Middle East, especially Egypt and Syria, after the war, as well as employment in their security services and propaganda ministries. Some even converted to Islam, finding in it the fullest expression of their fascism. In this sense Nazism played a direct role in shaping the modern Middle East.

Three elements drew Arab and Muslim leaders to the Nazis. First was Muslim theological antisemitism, which meshed well with Nazi racist antisemitism. Muslims needed no lessons regarding Jew hatred. The Koran and other Islamic sources are filled with verses reviling Jews as filthy schemers and betrayers of the prophet and calling for their mistreatment and murder. The lengthy history of pogroms against Jews in the Arab and Muslim worlds shows these theological exhortations were taken seriously. New, however, was the language of Jews as vermin and the fantasy of a single global Jewish conspiracy. Treatment of Jews in Germany also emboldened Muslim anti-Semites who were encouraged to prepare their own attacks.

In the second place was local hatred of British and French imperialism, which for most Muslims had theological dimensions, since it entailed being ruled by infidels. Finally, there were local concepts of nationalism, which outside of Egypt were still mostly held by ambitious intellectuals, civic notables, and military officers. The ultimate prize of self-determination was power over others. All three elements remain in play today, sometimes masquerading as one another.

The Farhud shows that, despite Western desires, in the Middle East religion and politics have always inextricably linked.

More articles on the Farhud