Jews keep heads down as Erdogan gets re-elected

Tayyip Erdogan and his AKP Islamic party have won a third term in Turkey's elections, but it is a safe bet that none of Turkey's 10,000 Jewish voters cast their votes for him. In the run-up to the elections Turkey's chief rabbi did what fearful and intimidated Jewish leaders have always done - make pronouncements of loyalty distancing themselves from Israel. Another sign of how far relations between the two countries have deteriorated is that Erdogan no longer talks to Refael Sadi, a student contemporary. The two men have drifted apart, according to this Ynet News report:

Where is the Jewish vote in all of this? "We don't go into politics. Each person knows who and what he will vote for and does so. It doesn't make sense for the Jewish community to deal in politics."

Possibly it is this short sentence, the only remark Turkey's Chief Rabbi Isak Haleva agreed to share with Ynet, that symbolizes the position of Turkey's Jews on the eve of the 2011 elections. Last year, following the events of the Gaza flotilla and the incidents on the Mavi Marmara, Rabbi Haleva harshly criticized Israel, accusing it of unnecessary provocation and inappropriate behavior. The rabbi even went on to praise Erdogan and claimed that he "was making a clear distinction between the State of Israel and the Jews of his country and ensuring their safety." Most likely, the above statements aren't a true expression of Rabbi Haleva's opinions. After all, it was Rabbi Haleva who a short time after his son Yitzhak was injured in the 2003 terror attack at the Istanbul synagogue rushed to declare: "No one will succeed in breaking my Jewish pride and my connection with Israel." The criticism of Israel and the Turkish fez he wore on his head were likely part of his attempt to prove his loyalty to benefit a higher cause, one which has been marked by Jewish leaders and rabbis for generations – defending the Jewish community and keeping it far from any inflammatory cause that could harm it. Turkey's Jews number 20,000 – a drop in the ocean among the 80 million residents of the Turkish republic. "Jews don't have a political body, they have the rabbinate and that is it. Their leadership isn't political and it is clear that they don't want to come out with declarations that could endanger the Jewish community," Denis Ozlu, a well known born and bred Istanbul resident said, explaining the motives of community officials. Ozlu, who unlike many in Turkey's Jewish community openly declares that he will be voting for CHP, said: "If I were to be the community's official voice I would also express myself differently". Spokesman for the Turkish expats association in Israel, Refael Sadi, also came out in defense of Rabbi Haleva, who was once his teacher. 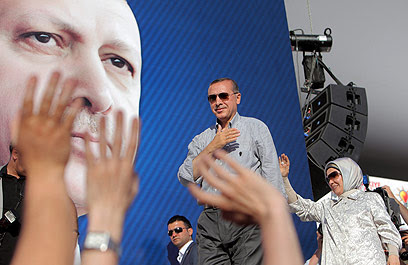 Sadi, who made aliyah in the '90s, studied at university with Erdogan at Istanbul University's economics program between 1974 and 1978. Until recently the two still maintained their friendly relationship and Sadi, who runs a news site that caters to Turkey's Jewish community, interviewed Erdogan for the Jewish newspaper when the prime minister visited Israel. Yet the deterioration in relations between the two countries led the two to drift apart. According to Sadi, the Jewish silence over the upcoming elections doesn't stem from direct fear of Erdogan who, if one takes the way he presents himself to the West as equality loving supporter of religious freedom, can't hurt the Jews directly.

"The fear is of extremist organizations in the country that receive reinforcement from the prime minister's statements against Israel," Sadi said.

According to Sadi, although Erdogan declares that Turkey's Jews are an inseparable part of the Turkish nation, his statements against Israel give legitimization to the hatred expressed against Jews on the Turkish street.

Describing the heated atmosphere days before the election, Jackie Angel, a Turkish Jew from Istanbul who made aliyah when he was 13 and returned to Turkey after 15 years, said: "There are massive rallies every day. On Friday there were 300,000 people in Izmir and 200,000 were at the square here last week."

And yet, he added that "the fact that the winner seems almost a forgone conclusion means that people aren't very excited here." Angel said that he was planning to vote for the opposition party in the elections but even if the forcasted results are proved to be correct and Erdogan gets reelected, Angel doesn't believe that the situation in Turkey will witness any drastic change.

"Erdogan doesn't have 70% of the vote, far from it. There are other parties that will balance him," he said.

And what would happen if he did have the electoral power? Angel estimated that Erdogan "would change all the laws from a religious perspective, not to an extreme like Syria or Egypt, but he would still aspire to create a democratic Islamic state."

Angel believes that most Turkish Jews will be voting for the opposition party (CHP) "like every election" but pointed out that he never forgot, not for a moment, the stories his father told him describing how just a few years back the heavy taxation under which the Jewish community suffered was imposed by none other than the opposition party.

Yet alongside the sweeping support given to the CHP by the Jewish community, Angel said that Turkey's stable economic situation has brought about Jewish support for Erdogan's party.

"It (the economic situation) influences people; they see the situation in the world and economies collapsing. People think of themselves," he said.

Tal Eritz, 51, was born in Izmir and now lives in Antalya. She represents the other side of the political map, and is a rare example of someone who speaks out openly, expressing anger over Erdogan's statements against Israel. She told Ynet about her sister and niece who live in Israel and are afraid to visit her. She also tells of a great deal of anger within the Jewish community towards Ankara's attitude to Israel, the Chabad representative who left because there are no longer any Israeli tourists, and even the Turkish merchants in the Souk who have no business and keep asking her when will the tourists from the Holy Land return.

Thus, even though her friends tell her she shouldn't speak openly against the Turkish authorities, Eritz said she wasn't afraid.

"Heaven forbid that I would vote for the ruling party. I'll vote for Kilicdaroglu. Erdogan's remarks are intended for anti-Jews and anti-Israelis; he wants their vote," she said.

I heard Erdogan on BBC radio 4 news last night and he sounded exactly like hitler: the hysterical ranting and aggression: it was terrifying.

This article shows some of the problems brought by Erdogan.
http://hotair.com/greenroom/archives/2011/06/13/erdogan-ottoman-echoes-growing-louder/