How many Jewish refugees are there? 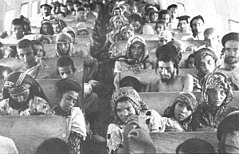 Yet another one-sided piece on the Guardian's Comment's is Free about the rights of the 4.8 million Palestinian refugees and their descendants prompted CiFWatch's Adam Levick to observe that Jewish refugees are always forgotten. But there were more Jewish refugees than Arab - so it stands to reason that, were the UNWRA criteria applied to them and their descendants, there could be over five million Jews eligible for refugee status.

"I further began wondering why, in the context of the fact that the UNRWA recognizes 4.8 million Palestinians as the official number of “refugees” – which includes descendants (and further descendants) of the original displaced refugees – there has never been a count of total number of Jewish refugees (900,000) from Arab lands which similarly includes their descendants.

Well, of course, the reason why such a number has never been established is largely based on the fact that such refugees were absorbed into Israel or emigrated to the West, but the fact remains that there has not been recognition of the enormous suffering, and subsequent loss of property and assets, which resulted from Arab nations’ decisions to expel their Jewish citizens for no reason other than they happened to share religious background of the majority of citizens in Israel.

Of that 900,000 figure (depending on estimates) there are around 5,000 Jews left in Arab countries, representing an expulsion rate of well over 99% of the total who once lived there – Jewish communities which dated back hundreds and, in many cases, thousands of years.

Equal justice demands that, if Palestinian refugees from Israel, displaced as the result of the War of Independence (a war initiated by the Arabs), and their descendants continue to get special status as permanent refugees and will eventually receive some sort of compensation for their loss, Jewish refugees and their descendants should similarly get recognition and compensation.

Yisrael Medad thinks the number of Jewish refugees could be as many as 5.2 million:

"By the way, in 1951, Israel informed UNRWA to stop assisting Jewish refugees from the territories of Judea, Samaria and Gaza, just over 3,000 (with an additional 15,000 almost of non-Jews) as the state of Israel could do that by itself.

Now, the question has come up: if the number of Jewish refugees from Arab lands is that "there were more former Jewish refugees uprooted from Arab countries (over 850,000) than there were Palestinians who became refugees in 1948. (UN estimate: 726,000)" ( from JJAC) but there's this, too: "A total of 586,269 Jews from Arab countries arrived in Israel with at least 200,000 emigrating to France, England and the Americas. Including their offspring, the total number of Jews who were displaced from their homes in Arab countries and who live in Israel today is 1,136,436, about 41% of the total population. At least another 500,000 currently reside in France, Canada, the United States, Latin America and Australia" (from this 2002 paper) can anyone accurately calculate a true number of "Jewish refugees from Arab lands" that need to be included in any discussion of refugee rights? Or is 1.2 million fair based on the above?
The Arab annual growth rate could be probably 1.0317.

If we start with 800,000 Jews and apply the same growth we get 5.2m in 2008. I'd say you could happily claim anywhere from 3.8 million to 5.2 million descendants of Jewish refugees which doesn't add up to the quoted figures above."

A commenter called BOL has suggested there could be as many as 5.9 million Jewish refugees:

"Just by using the same growth rate as the Pals. we have this data:

"So, if the Arabs can claim 4.8 million (and not 6 million like that Coldplay-recommended song asserted), well Jewish refugees from Arab Lands number 5.9 million."

The Farhud was discussed on Israel radio Reshet Bet this afternoon.

don't forget the jews expelled fro m places in the current west bank and gaza such as gush etzion or hebron, or east jerusalem

I don't know anything about how UNRWA operates, but I think it would be fair, once we quantified the number of Jewish refugees, if we took our case to them and forced them to decide on whether to accept Jews expelled by Arab countries, and their descendants, as official "refugees".

It's an intriguing gambit and let's try it. Who knows, it might make people realise how absurd it is to talk of Palestinian refugees 60 years later. The danger is that such a strategy might backfire on us - the last thing we want is a 'right of return' for Jews to Arab countries.