As a Jew, I identify with the Copts: David Harris 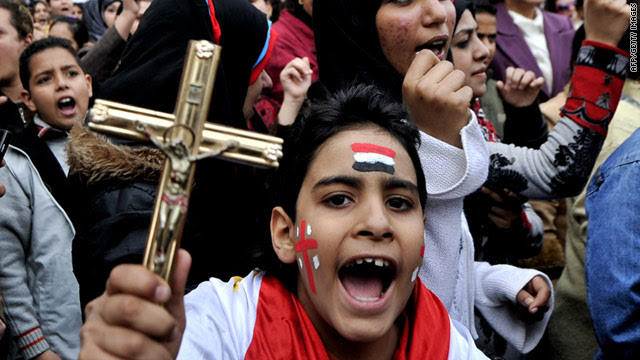 Egyptian Copts protest at the burning of a church in March

It happened to the Jews; it's now happening to the Copts. The precarious state of Egypt's Coptic minority is a reminder of what can happen when legal protection for minorities is left to the whim of the authorities, writes David Harris in the Huffington Post:

..If a page is to be turned in the Arab world's most populous country, it cannot come at the expense of a vulnerable minority. Copts have lived in Egypt for nearly 2,000 years and represent the largest Christian minority in the Middle East, comprising ten percent of Egypt's 83 million inhabitants.

While some Egyptians, to their credit, have spoken bravely of national unity between Muslims and Copts, they have not been able to stop the deadly assaults or lessen the widespread fear.

As a Jew, I identify with the Copts' situation.

Perhaps it's because we can write a doctoral thesis on the topic of minority status. We know all too well what it means to live in a country where legal protections are left to the whim of the authorities, not embedded in a country's DNA or democratic architecture.

Indeed, according to the 1971 constitution, Islam is Egypt's state religion. Nine years later, the state added that the religious principles of Islamic jurisprudence are the principal source of national legislation.

The story of the Copts is all too familiar.

Jews not so long ago also resided in the Arab world. Their roots stretched back hundreds, if not thousands, of years. They actively contributed to the societies in which they lived. But today, with notable exceptions in Morocco and, to a lesser degree, Tunisia, the Jews are essentially gone, driven out by the same forces that today threaten the Copts.

Arab apologists tried to blame the Jewish exodus on the "born-in-sin" Israel, the "all-powerful-and-scheming" Zionists, the "duplicitous" Jews themselves -- anyone who'd go over well as a scapegoat for local consumption but the real culprits. Now, in eerily familiar fashion, the blame is being placed on Christians for their own misfortunes, as if they brought it upon themselves. National introspection has been in short supply.

They had lived in Libya for centuries. Even as most Jews fled the country after the deadly pogroms of 1945 and 1948, they stayed. They wanted to believe that the new Libya, established in 1951, would abide by the minority protections in the constitution. They were dead wrong.

They were treated as second-class residents. And in 1967, there were more attacks on Jews. Ten people -- parents, my wife and her seven siblings, the youngest just three years old -- went into hiding for two weeks, having been threatened with torching by a raging mob. They were saved, it should be said, by a courageous Libyan Muslim. Yet, 44 years later, his identity still cannot be revealed, lest his family be harmed for the act of saving Jews.

In the end, some 800,000 Jews fled their ancestral lands in the second half of the 20th century, but there was hardly a peep from the international community. The UN kept silent. Democratic governments, hypnotized by the lure of oil and markets, averted their gaze. The churches, intimidated or just plain indifferent, were mum. Leading media didn't find the stories of Jews on the move -- so what else is new? -- fit to print.

Maybe had the Jewish story been told, it would have led to greater effort to safeguard the remaining minorities, especially Christians. After all, once the Jews were gone, it wasn't hard to predict who the next targeted population would be.

Apropos, in the old Soviet days, the story goes, a venerated Armenian leader lay on his deathbed. The elders gathered to hear his last words of sage advice. Summoning the last ounce of energy, he whispered, "Save the Jews." Those around him were puzzled by the unexpected advice. They asked him what he meant. "Save the Jews, you fools," he sputtered. "If Stalin finishes them off, we'll be next."

Today, it's not about the Jews but the Christians. Yet, strangely there's a sense of "déjà vu all over again."

Will the world react any differently? There's a huge opportunity. Egypt is redefining itself in the post-Mubarak era. Which way will it turn -- towards enlightenment or darkness? Western nations, led by the United States, have declared Egypt's future a top priority. That means tons of development assistance, not to mention encouragement of investments, exchanges, and tourism.

Clearly, there need to be conditions attached. Christians must be protected in every sense. They are in Egypt by right, not sufferance. They are full citizens, not transients. They deserve equal protection under the law. In other words, they are a barometer by which the "new" Egyptian society will be measured.

No one spoke for the Jews when they were driven out. It's high time to speak out for the Christians. In reality, we're all in this together.

The Last Jews of Libya film will be screened in central London at 8pm this Wednesday 15th June. Further details from Harif.
Posted by bataween at Monday, June 13, 2011