The Afghan 'Yehud' is renting out the synagogue 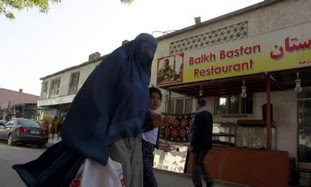 For some years now Zebulon Simantov has been capitalising on his celebrity status as the last Jew of Afghanistan. Reuters (in The Jerusalem Post) reveals the secret of how Simantov makes ends meet (between interviews with journalists bearing the obligatory bottle of whisky). But isn't it strange : the fact Afghans tolerate one Jew among them is hailed as some kind of achievement, while their 'ethnic cleansing' of 4,999 others is not even mentioned.

"Some of my customers know this is the synagogue and know about the Jew upstairs, but they don't care and neither do I," Ahmad told Reuters in his cafe, where bearded men on purple cushions puff on water pipes and eat traditional Afghan food.

The firebrand anti-Semitism found in some other Muslim countries, often fueled by anti-Israeli sentiment, seems noticeably absent among ordinary Afghans.

"I pray my way and he prays his way. I see him as a friend, someone to spend time with," Ahmad said of his landlord, sitting beside large black and silver wall-hangings depicting Mecca.

Zebulon Simentov, who chose to stay behind when his wife and children emigrated to Israel, has been known to conduct services in the upstairs of the synagogue for visiting Jews even though he is not a rabbi.

He achieved fame beyond Afghanistan's borders because of a raging feud with the country's second-last Jew that only ended when his rival died in 2005, and which inspired a US play.

Now living alone in the synagogue, the 52 year-old says the building has become too hard to maintain.

"This place is big and I need money," he told Reuters as he adjusted his pajama-like shalwar kameez, traditional clothing for men in the region.

Simentov traces his ancestors to the western Afghan city of Herat, the cradle of Afghanistan's Jewish civilization, which he still visits sometimes. But after 2,000 years, the community there has died out.

Today, only raised Jewish graves with Hebrew lettering and ornate stone synagogues remain, one of which was renovated two years ago and turned into a school for Afghan children, a move celebrated by Herat's Jews who had left for the West.

In Kabul, Simentov spends most of his time in his small room, where Hebrew calendars look down on a small red sofa bed and a mahogany table laden with silver bowls of almonds and Sabbath candles.


Three businessmen now rent space from him, and may be joined by others, in a city where despite decades of war, property prices are booming and space is at a premium.

He said a grey-painted room littered with concrete debris, adjoining his, would also be put on the market. "Soon that one will also be rented out."

Wary of talking to reporters after years of media attention, he declined to comment further on his plans for the synagogue.

But he is well-liked by his neighbors and tenants. Amongst the unpaved and dusty roads encircling his synagogue, he is known simply as "the Jew", or "Yehud" in his native Dari.

His penchant for whiskey -- extremely expensive and hard to obtain in Muslim Afghanistan, but totally permissible in Judaism -- has also earned him affection.

"Everyone here is doing their own kind of business. I am doing mine and he is doing his. We just want to feed our families," said Qadar Zada, perched on a stack of deep red carpets in the shop he opened six months ago.

Read article in full
Posted by bataween at Friday, June 03, 2011