Why President Obama is being unfair 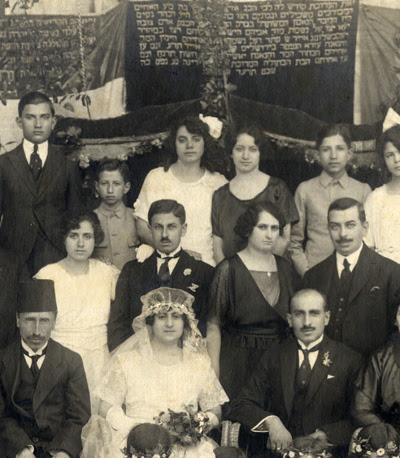 Jewish wedding in Aleppo, 1914. Few Jews are left in Syria

Good on you, Rabbi Akiva Herzfeld. Reacting to the one-sidedness of President Obama's major foreign policy speech, you have some important home truths to tell the good citizens of Portland (Maine), according to the Portland Press Herald.

I believe that in the very way that our president tells the Israeli and Palestinian story, he himself has been unfair. It's a radical idea to fix current events by ignoring history.

Obama has ignored a critical story of the past, that of the Jewish refugees from Arab lands, in his most recent speech about Israel.

A full knowledge of history should change our understanding of what is actually "fair" for the present.

The Palestinian refugee story has received much attention, but the parallel story of loss and exile endured by many Israeli refugees, despite its significance, has not received attention.

For example, last Monday The New York Times printed a commentary by the head of the Palestinian Authority, Mahmoud Abbas. Sixty-three years ago, Abbas writes, he was "forced to leave his home" in the city of the Safed and "flee with his family to Syria*."

Abbas explained that on Nov. 29, 1947, the United Nations declared its approval of the partition of Palestine. The U.N. resolution called for the territory of Palestine to be divided between Israelis and Palestinians.

After that resolution, Abbas writes, "Zionist forces," in his words, "expelled" the Palestinians from their territory.

Abbas grew up in a refugee tent camp in Syria, exiled from his birthplace. This is the Palestinian story. They want sympathy for remaining in refugee camps, and they blame Israel and the Jews for their hardships, and for the current refugee problem.

The story that Israelis know as true is much different. The Jews were expelled from their homes in Arab lands in the same way that Mahmoud Abbas claims he was expelled from his home in Israel.

Before the 1947 U.N. resolution, there were hundreds of thousands of Jews living in Arab lands. Following the 1947 declaration, which advocated two states, one for Israel's Jews and one for Arab Palestinians, the Jews reacted with gratitude and happiness. The resolution did not meet all the Jewish needs, but there was willingness to compromise.

In contrast, the Palestinians and Arab states reacted with violence to the resolution. This would be a telling moment for the future. As many see it, with every Jewish compromise for peace, Arab violence is sure to follow.

On Nov. 30, 1947, The New York Times reported: "There was an open thread of warning running through all the Arab delegates' comments on the Assembly's action. They spoke of bloodshed to come."

On Dec. 1, the Times reported that in Damascus, "crowds converged on the American and French legations, stoning both buildings and hauling down the flag flying in front of the United States building."

Syrian President Shukri Bey al-Kuwatli assured the mob: "Partition will not be accepted and will not be enforced before the last Arab is annihilated."

He declared: "Partition threatens not only Syrian independence but the very being of all Arab nations."

That same day, the headline announced: "Palestine's Arabs Kill Seven Jews, Call 3-Day Strike." The chair of the Palestine Arab Higher Committee declared "a crusade against the Jews." The Arabs, he said, "would fight for every inch."

On the same day, rioters in Aleppo, Syria, set fire to one of the oldest Jewish synagogues in the world. As they burned down the holy synagogue, the Arab mob chanted: "Falastin Baladna al Yahud kalabna" -- "Palestine is ours, and the Jews are our dogs."

There are no Jews left in Syria (well, a handful - ed). The Jewish Syrians fled their birthplace. Behind them, they left personal property and emotional memories. This is just one Jewish community in just one Arab town.

Similar stories took place for the Jewish people in other Arab lands. As the children of Jewish refugees went to work building in Israel, the Arab countries to which Palestinians turned have made those Palestinians sit and wait.

The story of the past should be heard, but unfortunately, too often, only one story, the Palestinian story, is told. If Obama truly seeks a "just and fair" resolution, he must seek to understand the histories of both sides.

*Efraim Karsh questions whether Abbas was expelled at all.
Posted by bataween at Monday, May 23, 2011

Palestinians have become masters in reversing situations. They were kicked out they say. But who forced them to leave their homes with the promise that the Arabs would push back el Yahoud into the sea? They are re-writing history and much to my sorrow have convinced a lot of people of their inaccuracy.
Today someone told me that "the Jews" had massacred the Arabs and taken their homes. I felt i was going to die.
That's why I once said: to be Jewish in Europe you must be strong
Sultlana Latifa a former refugee etc

The first refugees in the Land of Israel in the 1947-1948 Israeli War of Independence were Jews. The Arab League and the leaders of the local Arabs --not yet called "palestinians"-- had declared war against Jewish independence in the Jewish homeland. Arab forces were attacking Jewish civilians in south Tel Aviv, Haifa, and parts of Jerusalem, etc. The first refugees in the war who could not go home after it were Jews, those who lived in the quarters of Shimon haTsadiq, Nahalat Shimon, and Siebenbergen Houses, close to the American Colony Hotel and the Orient House. They were driven out in December 1947 and January 1948.

As to mahmud abbas' op ed in the NYT, it was rather obviously written by a ghost writer who knows how to play on the emotions of Americans.

Eliahu, why are you scared of putting your own picture?
Waiting for better times may never happen.
suzy Vidal

Suzy, very simple. Knowing what kind of people are around in this world, I am trying to conceal my identity which is what everybody who uses a penname or nickname on the Web is doing. I am keeping private not only my name but my face. Besides, using this photo of my mother gives me a pleasant reminder of her in her happy moments, in view of the hard life that she led. As to waiting for better times, we have to keep on fighting for that, each in his or her own way.