Oriental Jews 'did not suffer in Shoah '- Methodists 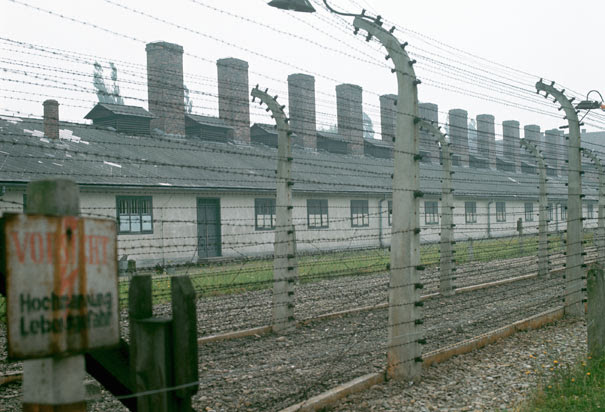 The UK Methodist Church has stooped to a new low with this document, whose ignorance is only matched by its malice. Elder of Ziyon has a good post challenging the Methodists' assumption that Sephardi Jews did not suffer in the Holocaust: (with thanks: Amie)

"One of its authors chastises Yad Vashem, Jerusalem's Holocaust museum: "'Israel is the only real answer to the Holocaust' is the message ... This perspective is transmitted to young Israelis through visits to Yad Vashem organised by schools and other groups. When I visited the Centre ... I noticed that many visitors were not of European Jewish descent. As Michael Ipgrave, then Secretary of the Churches' Commission for Inter Faith Relations, wrote in his report of the visit: 'The Holocaust has come to serve as a national story embracing also Oriental Jews for whom this was not part of their family history.' (my emphasis - ed) Peace groups in Israel have to work against this backdrop."

Rabbi Abraham Cooper sets the record straight in the Huffpost:

"Want peace? Decouple Israel from the Holocaust. Curiously, the Methodists' narrative goes beyond Palestinian chutzpah, whose historic revisionism ignores three millennia of continuous Jewish presence in the Holy Land, and insists that the Allies manufactured the State of Israel to provide a home for survivors of the WWII Holocaust that these Methodists now want Jews to forget.

"Want peace? Forget the collective memory of losing a third of your people, including 1.5 million children. For it's the "collective memory of the Holocaust [that] also feeds into an ethos of victimhood." Israelis should also turn the other cheek when rockets rain down on their children's school buses; turn a deaf ear when Palestinian imams promise the faithful a day when the rocks will call out to kill the Jews hiding behind them; turn a blind eye when the "moderate" Palestine Authority names streets for martyrs who murdered Israeli civilians; when one third of that same "moderate" population supports the savage butchering of a sleeping Israeli family in Itamar, including the all-but beheading of a 3-month-old baby.

"Take their reference to "Oriental" -- meaning Sephardic -- Jews. These experts must have forgotten the Sephardic Jews of Greece, 87 percent of whom were murdered by the Nazis. Never mind the Jews of the Maghreb were on Hitler's hit-list. These leaders also remembered to forget that it was Christian countries who slammed their gates shut before desperate European Jews, and that millions could have been saved had there been a State of Israel in the 1930s and 40s."

A couple of points beyond what Cooper said specifically about the Sephardim, Elder of Ziyon adds.

One is that there was a massacre of Jews in Iraq - the Farhud - during the Holocaust that was inspired by the infamous, Nazi sympathizing Mufti of Jerusalem. Here is a direct link between Arab anti-semitism and the Holocaust for Sephardic Jews. But in a broader sense, the outrage that the Methodists feel about how Sephardic Jews are being taught about the Holocaust betrays their own anti-semitism. By mentioning it, the authors indicate that they do not believe that the Jewish people are a nation - the Sephardim, to them, have nothing in common with Jews who lived in some European countries. It is beyond their comprehension that Sephardim might actually care about their fellow Jews on their own, without being indoctrinated by the Zionists!

You might have added that 4,000 Jews were sent to Nazi Labour camps during the German occupation of Tunisia in 1942 and that dozens died. In Libya, 600 Jews died of disease and starvation in the Giado camp and a few Jews were sent to the death camps in Europe . All Jews suffered anti-Jewish quotas and restrictions. Recently Moroccan Jews became eligible for compensation payments for discrimination under Vichy rule. Hundreds of North African Jews were deported from France to the death camps. Even Iraqi Jews living in France were exterminated: My father's uncle was denounced and deported to Auschwitz, while a second uncle witnessed his wife and step-daughter being taken away to their deaths.
Posted by bataween at Saturday, May 07, 2011

'The Holocaust has come to serve as a national story embracing also Oriental Jews for whom this was not part of their family history.' (my emphasis - ed) Peace groups in Israel have to work against this backdrop."

I am not sure I quite understand this. For what purpose?
Beside the fact that I resent the term "Oriental", are they that naive so as to think that what is holding those populations together is the Holocaust?
On second thought, I am not sure I would like to explain it to them.

Sylvia, I knew people of this stripe when I was growing up. Their hatred of Jews is very deep. But they are more polite than Arabs and would never think of telling their children to casually throw stones at Jews and some Arabs have done traditionally [according to Prof Norman Stillman].

I would suggest to Rabbi Cooper that in the future, he add to his comments in discussions of this subject that Jews in Arab lands were victims of Muslim/Arab oppression for more than a 1000 years in the status of dhimmis, a status shared with Christians although Jews were often even more oppressed and humiliated than the Christian dhimmis.

When speaking of the Arabs and the Holocaust, we should all bear in mind that most of the Arab nationalist movement of the time was pro-Nazi and that the top Palestinian Arab leader collaborated in the Holocaust.

yes but what is it that they hope to accomplish? It's not clear from the text. Do they think that "decoupling Jews from the Holocaust" is going to make everyone leave Israel? What's the point? After all it seems that they are giving instructions to NGO that they are probably financing in part or in whole. To what aim? That is not clear to me.

They simply hate Jews and Israel. That's their purpose. Now you have to carefully examine their propaganda themes, which are not all that different from what comes out of the State Dept.

They totally overlook nearly 1400 years of oppression of Jews as dhimmis in Arab/Muslim-ruled countries. They create a false analogy between Israel and white racists in the American South [and the apartheid-like "jimcrow" system in force there into the 1960s] and between the Arabs in Israel and Black Americans. Of course, in real history, the Arabs/Muslims were the masters and the Jews were one of the subject peoples in the Islamic state. But their hatred of Jews and their anti-Israel political purposes lead them to make such a false analogy. They are subtle up to a point. But you can see what they're doing if read them carefully and bear in mind that they are not writing history but agitprop.
See link:
http://ziontruth.blogspot.com/2009/09/barack-hussein-obama-slick-subtle.html

Note how Obama himself dishonestly insinuates a moral equivalency between Israel and Hamas.

Satloff has done excellent work describing the reach of the Shoah to "Oriental" Jews, here: http://tinyurl.com/n5oen2

Under the influence of leftist Islamophilia, parts of the west are regressing to virulent anti-Semitism.

I forgot to add that the British-appointed Mufti of Jerusalem, Haj Amin el-Husseini, petitioned Hitler to recognize the Arab right to do the Jews in Arab lands as Germany was doing to Jews in Europe. Hitler told him during their interview in late 1941 that that was his own plan."When the German armies cross, the Caucasus, then will strike the hour of Arab liberation," quoth Hitler to Husseini. See in the book below:

what page? I happen to have the book at home

Sylvia, the book went through several editions. I am holding the 7th revised and updated edition, dated 2008 [Penguin pubs]. In this edition, the Hitler-Husseini discussion is on pp 51-55. See especially pp 53-54. This edition is divided into 5 parts and the Mufti-Husseini interview is in Part One.

On the Mufti's prior petition to Hitler on --inter alia-- recognizing the Arab right to do to the Jews what the Germans were doing, see:
1) Bernard Lewis, Semites and Anti-Semites [look husseini or mufti in the index]. This is the fullest account that I know of about the several versions that this petition went through, which were sent to Berlin from Baghdad.

2) Majid Khadduri, Independent Iraq [second edition only]. This book [only the 2nd ed.] contains the text of one of the versions of the Mufti's appeal.

I have the 1984 edition in 7 parts laqueur and Barry Rubin. Can't find it.

The Methodist Church has always been and is anti-Semitic and anti-Israel. In that sense, they are no better than the Nazis and today's islamonazis bent on destroying the state of Israel. God is watching though and they will have their day of judgment and it will not be fun.

It documents Arab collaboration with the Shoah in North Africa.

I am seriously begining to despise Methodists. I think they are a very sick people. Their G_d Jimmy Carter was in love with Pol Pot.

To be fair,not all Methodists agree and one, David, claims that anti-Israel Methodists are a minority and are losing ground:
http://www.methodistpreacher.co.uk/

In correspondence with me, the Methodist Church claimed that the article was never an official document. This despite the facts that the document was written by the Methodist InterFaith Coordinator, and was posted as a "background document", and was apparently on the website for years.
The author, who is currently a lecturer at Liverpool Hope University, claims that I failed to understand her grammar. When she wrote "orientals", she was implying "some" but not "all".
She also claimed that the documentwould be removed in routine clean-up. Actually, it was removed almost immediately after the story broke, thanks to you and Elder, along with the SWC.
Moral of the story: You can push back in the blogosphere!

Great news, Chana - thanks for 'doing your bit' too!

Here is an updated link to the US Holocaust Memorial Museum's posting of Satloff's Chapter 4, detailing the extensive North African collaboration in the Holocaust: