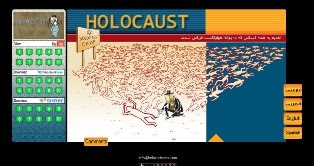 As Jews mark Holocaust Memorial Day in Israel, it is deeply upsetting to see that the Iranian regime is stepping up its efforts to deny and mock the systematic extermination of six million Jews in the Second World War - while it eagerly works towards the next Holocaust. According to MEMRI:

HoloCartoons.com, an antisemitic Iranian website launched in August 2010, aims to mock and denigrate the Holocaust, on the premise that these events were completely fabricated by the Jews for their own nefarious purposes.

A visitor to the website, which has pages in English, Spanish, Arabic, and Farsi, is greeted by the Pink Panther theme music, and informed that it is dedicated to those killed "under the pretext of the Holocaust." It features an e-book, "HoloCartoons," the preface to which reads, in part: "This book tends to denounce the conspicuous lie of the 'plan[n]ed murder of 6 million Jews during the Second World War' allegedly called 'Holocaust.' The lie that is so obvious that there is no need for any further explanation."

Visitors to HoloCartoons.com can also click on icons to view a series of antisemitic videos on Holocaust themes on the HoloCartoons YouTube channel.[1]

According to the Iranian semiofficial news agency Fars, Iranian cartoonist Maziar Bijani, a founder of Holocartoons.com, said that its funding comes from an Iranian non-governmental cultural foundation.[2]

In the past year, MEMRI has released a number of reports and video clips dealing with displays of antisemitism in Iran. Most of these displays appeared on websites either sponsored or authorized by the Iranian regime – including foreign language websites of the Iranian state broadcasting authority – that focus on Holocaust denial.

Email ThisBlogThis!Share to TwitterShare to FacebookShare to Pinterest
Labels: Holocaust in Arab and Muslim lands, Jews of Iran

Of course, in the next breath the "cultural foundation" will be comparing Israel to Nazi Germany