Now it's happening to the Copts 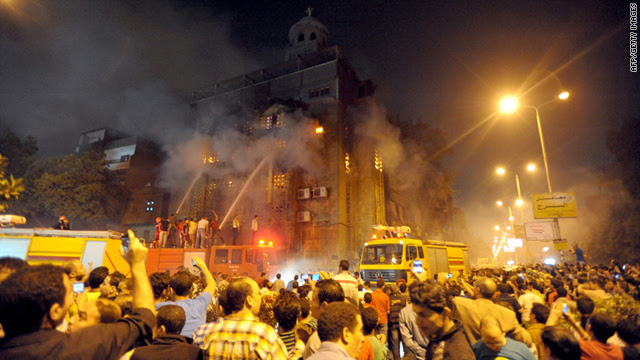 It's like the re-run of a horror movie for Jews from the Middle East: members of a non-Muslim minority gunned down and their places of worship burnt. The security services are nowhere to be seen, leaving it to well-meaning neighbours and friends to protect the terrified victims. Jews have seen it all before, but it's now happening to the Copts of Egypt. In this latest flare-up, the media talk of 'clashes' as if the Copts were equally to blame. Here's a report from CNN (with thanks: Eliyahu):

In the Cairo neighborhood of Maspiro, violence erupted when several hundred people, predominantly Christian but also Muslims, demonstrated in favor of national unity in front of the TV building.

Stones were hurled and people threw bricks from rooftops on predominantly Christian protesters. Some people were injured.

Chants could be heard of "with our souls and blood we will sacrifice ourselves for the cross." Military riot police with red helmets and clubs separated mutually hostile crowds.

Problems between Egypt's Muslim majority and its Coptic Christian minority have been on the rise in recent months, with a number of violent clashes reported between the two groups. Tensions flared after a recently-published U.S. government report on international religious freedom detailed the hostility targeting the minority Copts in the predominantly Muslim society.

During clashes on Saturday, witnesses said an armed group of Muslims marched on Saint Mena Coptic Orthodox Church, one of the oldest churches in Egypt.

"With my own eyes I saw three people killed and dozens injured," said Mina Adel, a Christian resident. "There's no security here. There's a big problem. People attacked us, and we have to protect ourselves."

How did the Copts treat the Jews back in the day?

Here's more about the flavor of the Cairo streets today:

update from cnn: a group of Copts demo'ed outside the US embassy in Cairo calling for US to arrange international protection for the Copts. I doubt that it will happen.

Just as happened during WWII, when the NYT secreted away tangential holocaust stories in their back pages, but kept the main story away from the headlines - today too mainstream media hides what we learn about from blogs like this one.

Vanguard is right of course. Look at what Hilary says --on behalf of Obama-- about basher assad being a reformer and such drivel. She repeated the silliness about the present Syrian regime being capable of reforms just a few days ago in an interview in Rome. The hypocrisy has reached the rancid stage:

A very good article and I realise that the issue is real, but i don't know if I am comfortable with the analogy to the Jewish refurees from the ME. The Christians in Egypt are strong, armed and use world media to their advantage. So they should. The jews in the ME had no support and only the state of Israel to turn to. Is not the same.

Today is Israel's 63rd birthday.
i just wanted to wish that tiny country surrounded by enemies
Bon Anniversaire.
i am very proud of Israel.
Sultana Latifa
a former Jewish refugee

Vadim
To anyone who has gone through it, Jews in the fifties or anyone else, not only does it bring back their memories, but the pain we feel is real and for me, even physical. I feel anguish every time I read that. We relive the sense of helplessness that these Copts trapped in their burning church are feeling.
What media did they have? Their attackers and their accomplices wouldn't let any foreigner anywhere close. Journalists, I read in an article, came there by taxi and ran away on foot without even having been permitted to reach that church.
Wake up: as far as today's international media is concerned, if a Muslim doesn't like you, then you must be in the wrong. It's that simple.

ziontruth...
Any connection between the choice of name with Bob Marley's songs? Didn't he have a song called "Zion Truth"? this week his fans marked the 30th anniversary of his death.

Sylvia, I am not familiar with Bob Marley's work. I rather prefer Miri Messika. But one of my sons helped me set up my site and proposed the name Ziontruth. Maybe he somehow had heard of Marley's song.

what are the copts' views on Israel? Some Coptic groups such as the American Coptic Union are pro Israel. However, some ME Christians, particulary Levantine Arab Christians are very anti Israel. Do you think ME christians that reject the "Arab" label tend to be more pro Israel(e.g.Maronites?) Also, do you think their denomination of Christianity affects this view?

Anonymous
We had this debate here, on the comments thread.
http://jewishrefugees.blogspot.com/2011/01/christian-free-egypt-is-not-beyond.html

As a Copt I have no problems with Israel, we in the west have dcelared that many times. The jews have every right to an independent nation. As a matter of fact I urge the Jews to keep very vigilant, Islam has no friends.