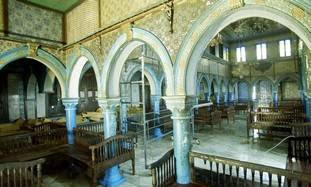 Under 100 arrived for the traditional Lag La'Omer celebration on the island of Djerba, despite its cancellation due to security concerns and travel warnings, The Jerusalem Post reports.

A small group of Jewish pilgrims gathered on an Tunisian island to visit one of Africa's oldest synagogues but worries over continued unrest kept many away from the annual event.

About 5,000 pilgrims from Tunisia and abroad usually travel each May to the El Ghriba synagogue on Djerba island in the south to mark Lag Ba'Omer.


But this year less than 100 took part and organizers cancelled traditional celebrations because of security concerns and lack of participants.

Only a few pilgrims came this year as the country struggles to restore order following the overthrow of Tunisia's authoritarian ruler Zine al-Abidine Ben Ali in January.

"This year was an exception, the atmosphere is different because of security in the country. It is a real shame," Perez Trabesli, the head of the Jewish community in Djerba said late on Friday, the day that usually draws the most pilgrims.