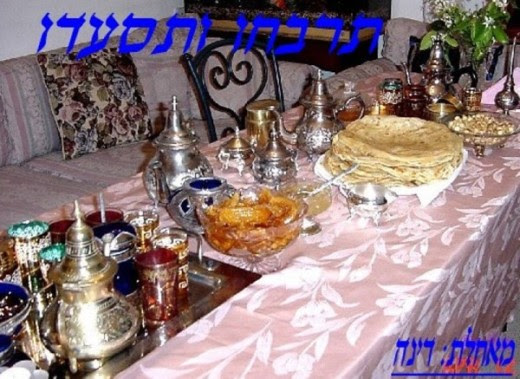 This year two million Israelis celebrated the Mimouna, the festival concluding Passover, thus nationalising a Moroccan-Jewish tradition. While intermarriage between Israelis of different origins is 'normal', the younger generation is rediscovering their grandparents' culture. Arye Tepper reports in Jewish Ideas Daily (with thanks: Kenneth):

This is no small achievement. All such exilic practices faced an uphill battle during the first decades after the founding of the state, and none more so than those deriving from Arab or Muslim lands.

For bureaucratic purposes, Israeli Jews in those years were grouped into two categories: Ashkenazi and "Oriental." Local Jewish identities were ignored, or in some cases erased. Although simplistic, the categories were also understandable. With so many groups from different lands being absorbed by the re-born Jewish state, there was a danger of cognitive overload. Moreover, the nation-building project required de-emphasizing the role of ethnicity in favor of a shared sense of national unity, not to say national uniformity.

Of course, the uniform identity was not neutral; instead, it reflected Western intellectual and social norms. But deeply rooted cultural practices could be suppressed for only so long, and a multiplicity of Jewish cultures survived the early years of the state and into the present day. They are seen in the food people eat, the music they listen to, the religious rituals they maintain, and the holidays they observe.

Sometimes these elements have come through in bundles. Consider, in addition to Mimouna, the singing of bakkashot, a wintertime liturgical rite common throughout North Africa and parts of the Levant; in it, Jews meet in the synagogue from 3:00 to 6:00 on winter Sabbath mornings to sing sacred Hebrew poems in the style of Arab-Muslim "art music." You can find Moroccan Jews who zealously maintain this tradition in every major Israeli city, with the added twist that now many non-Moroccans participate as well.

Or consider the flourishing of Moroccan and Andalusian piyyut, another form of liturgical music. Existing until recently along the margins of Israeli society, it has now moved beyond the synagogue and become a major art form in its own right, sometimes even rearranged and improvised upon in the style of jazz and blues.
Such cultural tenacity is not without its ironies and paradoxes. For example, one of the aims of Rabbi Ovadia Yosef in forming the Shas political party was to reclaim and reassert the enduring value of a Sephardi religious identity. Yet the very idea of a uniform Sephardi religious identity is to a certain extent an Israeli creation.

Historically speaking, "Sephardi" was never a homogeneous term; when Jewish communities moved southward and eastward after the expulsion from Spain at the end of the 15th century, tremendous tension prevailed between the newly arriving "Spanish" and the already established "Oriental" communities around the Mediterranean littoral. It is true that Josef Karo's 16th-century code of Jewish law, the Shulhan Arukh, contributed to fashioning a specifically "Sephardi" form of practice. But today, some of the most strident opponents of Rabbi Ovadia's program are rabbis representing North African communities whose traditions are threatened by a more global Sephardi identity.

Another irony: the theme of this year's Mimouna was the biblical injunction to "love the convert." In choosing it, the event's organizers were explicitly promoting a tolerant, North African form of Judaism as against the perceived intolerance of the ultra-Orthodox Ashkenazi establishment. But promoting it to whom? By appealing to Israeli society at large, the organizers were also acknowledging the primacy of a shared Israeli Judaism.

A final irony is suggested by a recent article in a leading American Jewish weekly claiming that "most young Israelis . . . often don't know and rarely care where anyone's parents or grandparents came from." This is too glib. Who, after all, is buying all the CD's by third-generation Israeli artists returning to the musical traditions of their grandparents? Kobi Oz (half-Tunisian), Dudu Tassa (half-Iraqi, half-Yemenite), Omer Avital (half-Moroccan, half-Yemenite), and others have all reclaimed particular Jewish cultures rooted in the Arab-Muslim milieu, in part for the purpose of exploring their own identity.

Yet if Israelis are indeed becoming interested in where their grandparents came from, this doesn't mean that the Jewish "melting pot" has failed. To the contrary: outside of ultra-Orthodox society, "intermarriage" between Jews from different ethnic communities is so normal that it's become too trivial to mention. Most significantly, the wide popularity of Mimouna itself—two million celebrants make up a formidable cohort—demonstrates the degree to which today's Israelis are open to absorbing Jewish traditions that in the strict sense, but only in the strict sense, are not their own.

Read article in full
Posted by bataween at Wednesday, May 25, 2011

I enjoy your posts - depite the rather superficial division that continues to prevail about Sephardics vs Ashkenaz (vs ?Yemenites, etc). I don't think it helps to keep drawing this line, when in fact we stem from 12 tribes - not two! Even Europeans in the East got to there by coming from the West.

As for "tradition", as in "traditional" - The Ethics of Our Fathers defines what this word means: "Moses received the TRADITION from Sinai, and he passed it on to Yehoshua, and so on. That's being "traditional", not a watered down version of that. It's taken on the unfortunate derogatory prefix "ultra", as in "ultra-orthodox".

I agree that the cultural division is rather superficial but it is there nonetheless.
What is interesting is that Israel is synthesising a new culture out of diverse traditions.

I agree that we should not agravate our case by dividing us Jews into categories.
Hitler (and Nasser) did not do this: They took us as a whole and in Europe with the help of the various authorities rounded us up as "Jews".
This being said and to prove the contradictions in every human being: I am a Sefardi Jew!
Have a great day
Sultana Latifa former Jewish refugee from Egypt