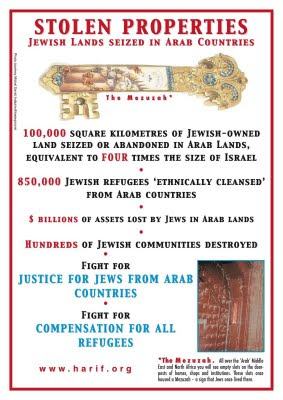 As Palestinians and their supporters mark 63 years since their Nakba, one small organisation in London is fighting back. Tonight, Sunday 15 May, at a conference entitled The Jewish Nakba: remembering Jewish refugees from Arab Countries, Harif will launch its Mezuzah campaign and associated posters and leaflets (above).

The Mezuzah is the perfect symbol of the lost or stolen Jewish home in Arab countries. Harif has conceived of a plastic give-away version, containing a fact-filled scroll, which can be distributed wherever pro-Palestinian demonstrators are waving their 'keys', demanding their 'right of return' to their homes in what is now Israel.

Harif is holding the conference to tell the world that the largest single group of refugees arising from the Arab-Israeli conflict was in fact Jewish. Although Jewish refugees were soon absorbed in Israel and the West, Arab states have never recognised their responsibility for some 800,000 Jewish refugees. Neither have they offered compensation for Jewish suffering and losses.

The conference will hear testimonies from individual Jewish refugees, and a person who helped in their rescue will be presented with a special award by Tom Gross, the Middle East commentator.

For conference details email info@harif.org. For an A5 version of the poster above please email bataween@gmail.com.

Maariv article (Hebrew) by Ben Dror Yemini (with thanks: Dor)

The hidden tragedy of the Jews from Arab lands : Adi Schwartz's blog (Hebrew - with thanks: Qumran Qumran)

many refugees were created in the twenthieth century but no other group got a UN group for themselves. There are no UN groups for Mizrahi Jews, ethnic Germans in Eastern Europe, Bulgarians from Turkey or turks from Bulgaria.

Just to tell you I've posted this:

If Iranian Jews are included, the total number of Sephardi-Mizrahi Jews ethnically cleansed from Muslim countries is about 970,000 - or just under one million.

I watched the programme on the Christian Channel and both ladies performed brilliantly. Kol haKavad

I am always writing and speaking regarding Jewish refugees from the Arab/Moslem countries to various blogs, websites and meetings.

I was unaware of your organosation and with your blessing will now inform as many people as possible.

As Anonymous stated above, no other UN organisation existed for other "refugees." The reason is simple, Arab oil money speaks all languages except to help their own.

Many thanks for your kind words, Martin!
Yes please do go ahead and continue your good work spreading the message about Jewish refugees.
Bataween