Getting nowhere fast with the Egyptian archives 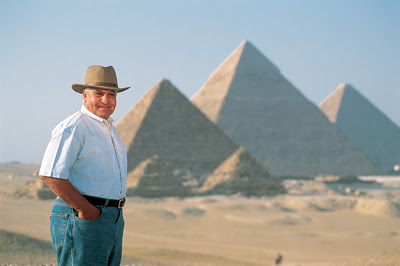 Seder night was cancelled in Alexandria this year. For the first time ever, the handful of Jews and Jewish tourists living in the Egyptian city were not able to celebrate the festival of Jewish freedom. The reason? The security forces could not guarantee their safety at night.

However - the security people told Ben Gaon, the timorous community head - they would allow a Seder during daylight hours. A Seder during the day? Whoever heard of such a thing! And so Ben Gaon cancelled it.

Mindful that Jewish life in Egypt is barely ticking over - it's on life support - the London/Paris-based Nebi Daniel Association has for some years been trying to salvage what it can of Egypt's glorious Jewish heritage.

In Alexandria , there is one functioning synagogue, and even that is mostly closed and heavily guarded. Nebi Daniel's efforts are focused on trying to gain access to the communal birth, deaths and marriage records still essential to Egyptian Jewish life in exile. These efforts concern only Alexandria: the community leader in Cairo, Carmen Weinstein, will not cooperate.

Roger Bilboul explains that the Egyptian authorities will not release the Jewish records, as they are considered part of the national heritage. But Jewish visitors have been known to tear pages out of communal registers, so Nebi Daniel has been trying to persuade the Egyptians to allow the documents to be made accessible yet safe, in case they are destroyed by fire or worse.

Nebi Daniel extracted a promise from the erstwhile culture minister Farouk Hosny, who in spite of his legendary antisemitism, wrote a letter delegating the task to a subordinate. But Hosny is now in disgrace as a member of the Mubarak old guard, and Nebi Daniel's only hope is invested in the Head of the Egyptian Antiquities Authority, Zahi Hawass (no friend of the Jews, he - either). Hawass miraculously survived a ministerial purge, even getting a promotion. But now Hawass is in trouble again, is busy fighting lawsuits, and has only just escaped a one-year jail sentence for corruption.

So the post-revolutionary future looks bleak to Nebi Daniel, as they run out of Egyptian officials they might interface with. Meanwhile, the fabric of Egyptian Jewish heritage carries on crumbling with each passing year.

Egypt's ping pong effect
Posted by bataween at Monday, May 23, 2011

This Hawas guy chief of antiquities keeps saying to all who wish to listen: The Jews did not build the Pyramids. They were free workers and there were no slaves.So now i hear he has probs
with his country's justice.
strange how the wheel turns.
Sultana Latifa
a former refugee from Egypt