Selection of photos http://www.flickr.com/photos/yefren/4305766944/ here. Note the Hebrew inscriptions on the ceiling of the Yefren synagogue.

A 2,000-year old synagogue in the Libyan town of Yefren is said to have been destroyed in the fighting now raging between President Gaddafi's forces and Nato-supported rebels.

Update on 14 April: a 'trusted source' says that the synagogue has not been destroyed, only a few houses in the old town.

This BBC report yesterday quotes a rebel fighter named Aydress. Aydress claims that Colonel Gaddafi's forces used rockets, missiles and anti-tank weapons to bombard the town of Yefren. They destroyed a mosque and a 'Jewish place of worship', 2,000 years old, he says. 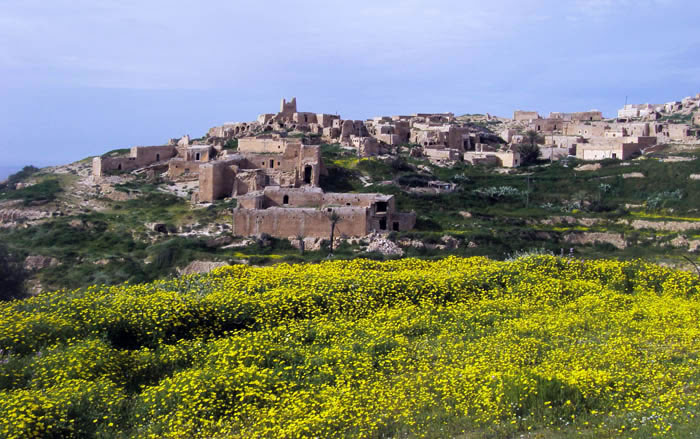 Yefren is a Berber town in the West of Libya famous for its troglodyte caves.

According to the Lonely Planet guide to Libya, the synagogue served the Jewish community up to 1948. (Many of the town's Jews went to Moshav Usha near Haifa). The ramshackle interior contains six arches and six windows (the number represents the six points of the Star of David) surrounding a raised platform. The ceilings are adorned with Hebrew inscriptions and Hamza hands.

This video takes you on a guided tour of Jewish Yefren. You can see the cemetery, the metal door with its 'menorah' leading to the synagogue, and the inscriptions inside. (With thanks: Anonymous commenter)
Posted by bataween at Thursday, April 07, 2011

You can see video of Jewish sites - including the synagogue and cemetery - in Yifrin here:
http://www.youtube.com/watch?v=HZ5nCsCkEJY&feature=related

Supposedly the Amazigh (Berber) chief of the town has warm feelings for the former Jewish inhabitants and has ensured that the cemetery and synagogue remain preserved.

It is no surprise that the Berber chieftain is sympathetic to the Jews. It is said that some Berbers converted to Judaism 2,000 years ago - even if that is not true, Jews and Berbers share a pre-Islamic past in Libya.

to make some balance in my society I published on my blog that I had visited the memorial of the martyrs of Holocaust in Paris and I'm honored.
http://notazr2a.blogspot.com/2011/03/blog-post_28.html

I hope you make the same role in your society.

Hi Andrew,
I didn't need to go back to 1970 to find this:
http://www.msnbc.msn.com/id/41810657/ns/world_news-south_and_central_asia/
Of course it is terrible when civilians get killed, but there is a difference between deliberate murder and accidental killing.

well, both are bloody killers >> that's the point

ya plus rien de sacré pour ces fils de!!!!Excuse me!
Suzy Vidal
i wish people would be more honest and sign with their full name.

Bataween, a trusted source in Yifrin says that the synagogue has not been destroyed - just a few homes in the old city. So for now at least this historic site is still standing.

That's a relief, thanks