Of Kurdish Jews and koobe dumplings 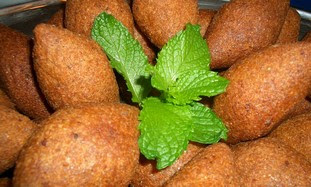 The Aramaic-speaking Jews of Kurdistan (northern Iraq) have had their ups and downs in history; their community was almost completely transplanted to Israel in 1950, where they work to maintain their distinctive customs and cuisine. Dennis Wasko continues his culinary series in the Jerusalem Post:

It is believed that Jews have lived in the area of modern Kurdistan since the 8th century BCE. Also known as Assyria and Mesopotamia, the area now encompasses parts of Iran, northern Iraq, Syria, and eastern Turkey. The first Jews arrived after the Assyrian conquest of the Kingdom of Israel and the subsequent exile of the ten tribes during the period 858 – 824 BCE. An ancient Kurdish tradition relates that Kurdish Jews are the descendants specifically of the tribes of Dan, Naphtali, and Benjamin.

In his travel memoirs, Benjamin of Tudela related that there were about 100 Jewish settlements and substantial Jewish population in Kurdistan in 12th century. It is also from Benjamin of Tudela’s memoirs that we learn of David Alroi, the messianic leader from central Kurdistan, who rebelled against the king of Persia and had plans to lead the Jews back to Jerusalem. Benjamin of Tudela also reports of wealthy Jewish communities in Mosul, which at the time was the commercial and spiritual center of Kurdistan. During the crusades many Jews fled from Syria, the Levant, and Judea to Babylonia and Kurdistan.

The Kurdish Jews were craftsmen by trade. They were traditionally farmers, gold and silversmiths, and weavers. Though skilled craftsmen, life was hard for the Kurdish Jews and economic distress and isolation from the outside world plagued the communities. Life was dangerous and murder was common. Jews were often sold into servitude up to the beginning of the 20th century. Due to these hardships and the rise of oppressive Islamic regimes the Kurdish Jews became a close knit community.

Judaism flourished in Kurdistan and many Kurdish Jews played a part in the compilation of the Babylonian Talmud. Among the most important Jewish shrines in Kurdistan are the tombs of Biblical prophets, such as that of Nahum, Jonah, and Daniel. There are also several caves supposedly frequented by the Prophet Elijah. All are venerated by Jews today.

Kurdish Jews began immigrating to pre-state Israel in the early 20th century after a series of brutal murders. The majority of Kurdish Jews immigrated to Israel in 1950-51. This period is known as the Great Exodus. The Kurds have always had strong Zionist leanings and one of the most famous members of the Lehi, Moshe Barazani, was of Kurdish descent. There are approximately 150,000 Kurdish Jews living in Israel today. They are very proud of their heritage and work to maintain their customs and language, Aramaic.

The dumpling, koobe, is the unique specialty of Kurdish cuisine. Some are round and some are moon-shaped, but they are all stuffed with delicious fillings, usually chicken or lamb, and served on the Sabbath, holidays, and all year long. Bulghur wheat, onion, garlic, celery, tomato, pepper, and lemon, combined in a multitude of dumplings, comprise the backbone of Kurdish Jewish cuisine.


Nebuchadnezzar II was the eldest son, and successor, of Nabopolassar, who delivered Babylon from its dependence on Assyria and laid Nineveh in ruins. According to Berossus, some years before he became king of Babylon, ((((Nebuchadnezzar II married Amytis of Media, the daughter or granddaughter of Cyaxares, king of the Medes, and thus the Median and Babylonian dynasties were united.)))))) There are also conflicting accounts of Nitocris of Babylon either being his wife or daughter. Nabopolassar was intent on annexing the western provinces of Syria from Necho II (who was still hoping to restore Assyrian power), and to this end dispatched his son westward with a powerful army. In the ensuing Battle of Carchemish in 605 BC, the Egyptian army was defeated and driven back, and Syria and Phoenicia were brought under the control of Babylon. Nabopolassar died in August of that year, and Nebuchadnezzar returned to Babylon to ascend to the throne.

After the defeat of the Cimmerians and Scythians,(((( all of Nebuchadnezzar's expeditions were directed westwards, although the powerful Median empire lay to the north. Nebuchadnezzar's political marriage to Amytis of Media, the daughter of the Median king, had ensured peace between the two empires.))))))))))))))

Many Kurds have the "Jewish" Cohen Modal Haplotype

In the 1990s, a team of scientists (including the geneticist Michael Hammer, the nephrologist Karl Skorecki, and their colleagues in England) discovered the existence of a haplotype which they termed the "Cohen modal haplotype" (abbreviated as CMH). Cohen is the Hebrew word for "priest", and designates descendants of Judean priests from two thousand years ago. Initial research indicated that while only about 3 percent of general Jews have this haplotype, 45 percent of Ashkenazic Cohens have it, while 56 percent of Sephardic Cohens have it. David Goldstein, an evolutionary geneticist at Oxford University, said: "It looks like this chromosomal type was a constituent of the ancestral Hebrew population." Some Jewish rabbis used the Cohen study to argue that all Cohens with the CMH had descended from Aaron, a High Priest who lived about 3500 years ago, as the Torah claimed. Shortly after, it was determined that 53 percent of the Buba clan of the Lemba people of southern Africa have the CMH, compared to 9 percent of non-Buba Lembas. The Lembas claim descent from ancient Israelites, and they follow certain Jewish practices such as circumcision and refraining from eating pork, and for many geneticists and historians the genetic evidence seemed to verify their claim.

However, it soon became apparent that the CMH is not specific to Jews or descendants of Jews. In a 1998 article in Science News, Dr. Skorecki indicated (in an interview) that some non-Jews also possess the Cohen markers, and that the markers are therefore not "unique or special".(((((( The CMH is very common among Iraqi Kurds, according to a 1999 study by C. Brinkmann et al.)))))))))) And in her 2001 article, Oppenheim wrote: "The dominant haplotype of the Muslim Kurds (haplotype 114) was only one microsatellite-mutation step apart from the CMH..." (Oppenheim 2001, page 1100). Furthermore, the CMH is also found among some Armenians, according to Dr. Levon Yepiskoposyan (Head of the Institute of Man in Yerevan, Armenia), who has studied genetics for many years. Dr. Avshalom Zoossmann-Diskin wrote: "The suggestion that the 'Cohen modal haplotype' is a signature haplotype for the ancient Hebrew population is also not supported by data from other populations." (Zoossmann-Diskin 2000, page 156).

In short, the CMH is a genetic marker from the northern Middle East which is not unique to Jews. However, its existence among many Kurds and Armenians, as well as some Italians and Hungarians, would seem to support the overall contention that Kurds and Armenians are the close relatives of modern Jews and that the majority of today's Jews have paternal ancestry from the northeastern Mediterranean region.

The Kurds and Arabs of Mesopotamia have interacted and intermarried for well over a millennium. Modern genetic studies indicate that Iraqi Arabs and Kurds are very closely related.[23][24] Arabic and Kurdish are Iraq's national languages. wikipedia

Hatra, Arabic Al-Ḥaḍr, The sun temple in the ruined city of Hatra, Iraq. [Credit: Christine Osborne—Corbis]
[Credit: Encyclopædia Britannica, Inc.]ruined city located in the Al-Jazīrah region of present-day northern Iraq, 180 miles (290 km) northwest of Baghdad and 68 miles (110 km) southwest of Mosul. A religious and trading centre of the Parthian empire, it flourished during the 1st and 2nd centuries bc. The city survived several invasions before being razed in ad 241. It is an important archaeological site with well-preserved ruins.

Hatra was probably founded in the 3rd or 2nd century bc, under the Seleucid kingdom. It rose to prominence as the capital of Araba, a small semiautonomous state under Parthian influence. Because of its strategic position along caravan trade routes, the town prospered and became an important religious centre. In the 1st and 2nd centuries ad, Hatra was ruled by a dynasty of Arabian princes whose written language was Aramaic, and it became known as Beit ʾElāhāʾ (“House of God”), a reference to the city’s numerous temples. Among the gods honoured were the Sumero-Akkadian god Nergal, Hermes (Greek), Atargatis (Aramean), and al-Lāt and Shāmiyyah (Arabian), along with Shamash, the Mesopotamian sun god. Built in a circular plan of military tradition, Hatra was able to turn back many attacks, including sieges by Roman forces in 116/117 (led by the emperor Trajan) and 198/199 (under the emperor Septimius Severus). About ad 240, however, the city fell to Shāpūr I (reigned c. 240–272), the ruler of the Persian Sāsānian dynasty, and was destroyed. According to legend, al-Naḍīrah, the daughter of the king of Hatra, betrayed the city and permitted Shāpūr to conquer it, slay the king, and later marry her. (Tradition also holds that Shāpūr soon killed his bride, however.)
http://www.britannica.com/EBchecked/topic/256881/Hatra