Hanania wants compensation - and so do I 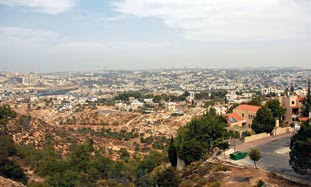 Oh the injustice. Over at the Jerusalem Post the Palestinian Christian columnist Ray Hanania has been berating the Israelis for treating his family unfairly, by refusing to compensate his family for their land in Jerusalem. Here is an extract of his piece, followed by my comment:

"My family owns 33 dunams – about eight acres – adjacent to Gilo, the Jerusalem “suburb” many around the world consider a settlement, which was founded several years after the 1967 War. That’s about 33,000 sq.m. It’s in a valley that faces Malcha and the sports stadium, surrounded by homes. It’s called the “Tarud” land, and was purchased by my cousin’s grandfather in the 19th century. Most of the brothers and sisters who owned the land have died, and only one cousin remains. He’s given me power of attorney to represent it.

I have tried. Israeli officials know that I own the land as its representative. Yet the government continues to announce plans to develop in that area. They have never contacted me or my cousins. The various reports on expansion have said new construction will take place on land owned by the Jewish National Fund and private land. “Private land?” What does that mean to Israelis? This whole conflict is about how we treat each other. And while Israelis always complain about how Palestinians treat them, only a few care about how they treat us. Jews have been severely mistreated and have had their land and property taken from them in European and Arab countries.

Many have already received compensation from European countries. As part of ending this conflict, perhaps those who fled or were forced out of Arab lands will also be compensated."

My comment: Yes, it is unfair that the Hanania family has not been compensated for land in Jerusalem. And I sympathise with Hanania's efforts to fight for compensation. He is relatively lucky, however: the Israelis are aware of Hanania's claims and he has been free to visit the property he claims is his.

ln what circumstances did he lose this land exactly? Gilo was under Jordanian occupation until 1967. So Hanania's land was not taken over by Israel in 1948. It could have been taken over in 1967, when Jordanian forces launched a second war of aggression.

There is this telling paragraph in Hanania's piece:

The mukhtar [leader] of the village of Sharafat has repeatedly refused to meet with me – an indication of the growing tension between Christians and Muslims in Palestinian territories that we are not supposed to discuss. It seems there’s discrimination from every direction.

Perhaps Hanania is not telling us the full story. Could it be that in the absence of the Hanania clan, like many Palestinian Christians who have for decades been living abroad, Muslim settlers from Sharafat have moved in onto Ray's land?

Be that as it may, there is enormous injustice on both sides of the Israeli-Arab divide.

My family lost two homes with large gardens in a prosperous district of Baghdad, a cafe, an office building, and acres of oil-rich date plantations in the Basra area.

Given that there were once 150,000 Jews in Iraq, multiply these losses many times over. Bear in mind the property lost across 10 Arab countries by almost one million Jews, and you get a devastating picture of mass spoliation.

Because Jews have received compensation from European countries, Hanania suggests that Palestinians should receive compensation from Israel, as if Europe had anything to do with the Arab-Israeli conflict, and as if there is no cost for having instigated wars of aggression in 1948 and 1967.

Hanania rather cavalierly suggests that 'perhaps' Jews from Arab countries will be compensated for property they lost simply for being Jews. But Arab states have not even recognised the legitimacy of Jewish claims many times greater than Palestinian claims, let alone provided any compensation. Hanania's is a very big 'perhaps'. Even though Iraq is now nominally a democracy which respects civil rights, the chances of my family obtaining compensation for our property is, I'll admit, as likely as a snowstorm in August.

So perhaps Hanania and I should call it quits.
Posted by bataween at Thursday, April 28, 2011

As you say, the Arabs "instigated a war of aggression in 1948." In this war, they attacked Jewish civilians from the beginning, that is, from the early morning on 30 November 1947 not long after the UN partition plan recommendation. The vote to recommend partition took place at about 12:35 am on November 30, Israel time, although in New York the time was 5:35 pm, November 29, 1947. Shortly afterwards the attacks on Jewish civilians began and in December 1947, Jewish civilians were fleeing south Tel Aviv, parts of Jerusalem, and elsewhere in the country. That was the first war.
Then again, in 1967, Jordan attacked Jewish civilians in Jerusalem with artillery stationed on hills around the city [like the Gilo ridge]. So there were two wars of aggression, not one. Let's not forget. Those are reasons why Arab claims are morally inferior to the Jewish claims.

Dear Eliyahu
Thank you for your informative comment, as ever. I have corrected the post to include mention of the 1967 war of aggression launched by Jordan in Jerusalem.

I want to ask something - Since when a pary which started a war entitled to compensations?

By this logic the Germans in 1945 are entitled to compensations.

good point, Idit. Why can't the Germans claim compensation for all the civilian infrastructure destroyed as a result of British & American bombing??

If I understand the situation correctly, Hanania's land has not been taken by Israel. If the land is eventually seized, he will be entitled to compensation, but at this point he is not. Am I missing something?

Well Bill..it's complicated.
Hanania says that a house has been destroyed and a well closed, and that Israel wants to develop the land. He may already be entitled to compensation for the destroyed house and the well, although commenters on this thread have made the point that if these incidents occurred as part of the 1967 war Arab land claims are inferior to Jewish claims. As you say, he may get compensation if Israel takes his land for development.
I suspect he is also in dispute with the local Muslims, although he doesn't spell things out.