'Flavours of Babylon' - a feast for eye and soul 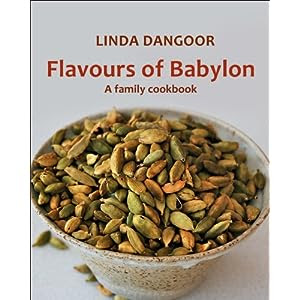 Linda Dangoor has salvaged the secrets of a robust and aromatic, but not spicy cuisine: Iraqi-Jewish cooking. Lyn Julius reviews Linda's new book, Flavours of Babylon, for The Sephardi Bulletin:

With only seven Jews still living in Iraq, the ancient Babylonian-Jewish community is on the verge of extinction. However, the secret tastes of its food, aromatic but not spicy, can still be savoured in private homes in Israel and the diaspora. But as the exiled generation die out, the links with Iraq-Jewish culture and food will become more and more tenuous, unless they are immortalised in book form, as Linda Dangoor has done in Flavours of Babylon.

Linda was only ten when she left Baghdad. Seventeen members of her family lived together in a house on the Tigris. She still has vivid memories of eating fresh produce from the garden. Food preparation followed the seasons: a huge amount of pickling and preserving fruit and vegetables took place in summer. She remembers picnicking on the small islands which emerged when the water level was down, and counting stars to sleep on the roof.

The cooking of the Iraqi Jews did not differ markedly from that of the local non-Jews. On special occasions stuffed sheep's stomach, Pacha, was eaten by all communities. In Baghdad, the cuisine was heavily rice-based ('A meal without rice is not a meal, it's a snack', the book tells us). The family's cook Gershone, was not especially assiduous preparing rice, and according to Linda, consuming his gritty dishes was like negotiating a minefield.

Meat stews were a staple for the whole region, but Jews often braised their meat (almost always lamb and chicken), making it go further in a sweet and sour tomato sauce, or stuffing it in vegetables. Olive oil was unknown in this part of the Middle East: so as not to violate the laws of Kashrut, Jews cooked in sesame oil, while the height of luxury for Muslims and Christians was to cook with butter. Another dish unique to the Jews was Urugh, a patty made with long-grain rice and fish, or meat. Every Thursday without fail Linda's family would eat the vegetarian rice and red lentil dish Ketchri, a variant of the Indian Kedgeree. But the signature dish of the Iraqi Jewish household was the Shabbat T'beet, chicken and rice flavoured with cardamon and baked on low embers with eggs that turned brown and sweet. They were eaten with umba, mango pickle imported in bottles bearing lots of medals and a ship on the label, a condiment almost as Iraqi as it is Indian, and nowadays popular in Israel.

Moving to England, Linda was at first bewitched by tinned peaches and instant cake mixes (just add water!). The infatuation with processed foods did not last long, and inspired by her Middle Eastern background, Linda was soon not only recreating her family's recipes, but inventing new ones, to which the second part of her book is devoted. "Let nothing which can be treated by diet be treated by other means", said the medieval rabbi and physician Maimonides, and this colourful book is nothing if not conducive to healthy eating.

And not just eating - Linda has a section on teas, infusions and other exotic drinks such as her all-time favourite - Hriri, the hot almond drink consumed at the conclusion of Yom Kippur.

Flavours of Babylon is beautifully presented, a feast for the eye and soul, as well as the stomach. It brings welcome reinforcement to efforts to shore up the fragile memory of Iraqi-Jewish food.

Interesting article. However, there were no Jewish people living in Babylon or Mesopotamia. Therefore, this is not a Jewish cookbook but it is an Assyrian cookbook.